Tyson Fury has admitted that he is banned from using Wikipedia after he was caught editing Wladimir Klitschko’s page as part of pre-fight mind games.

Fury beat Klitschko on points three years ago to unify the heavyweight division and performed a series of tricks to give him the mental edge over his opponent, including arriving at a press conference dressed as Batman.

The self-titled ‘Gypsy King’ is now preparing to take on Deontay Wilder for the one belt that has alluded him so far in his career, the WBC title. As part of the build-up, Fury has previously said he is living “rent free” inside Wilder’s head, but admitted he won’t be able to change the American’s Wikipedia page after he received a ban.

“Yes it is true,” said Fury when asked on BT Sport whether he would edit his opponent’s pages. “Until I got banned from Wikipedia.

“I did it because it I wanted to prove that, because it is a public site, anyone can write whatever they want on there. If you want to go on and edit my profile, you can.

“I have never edited anything on mine but because I am the lineal champion, someone keeps going on and writing I am retired, I am clearly not retired.

“So I keep changing it back to active and someone else keeps changing it to retired. Someone obviously wants me retired.”

He was then asked whether he thinks Wilder is playing with his page and responded suggesting it is coming from Anthony Joshua. “It might be coming from London somewhere,” he said.

The winner of the titanic heavyweight bout on 1 December is likely to be fast-tracked to the front of the line to face Joshua in a fight to unify the heavyweight division. After defending his titles against mandatory challenger Alexander Povetkin in September, Joshua has free reign to decide his next opponent and will fight at Wembley on 13 April 2019. 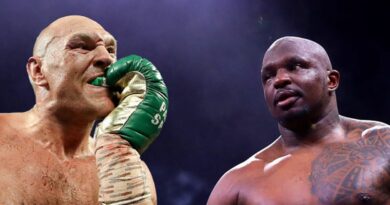