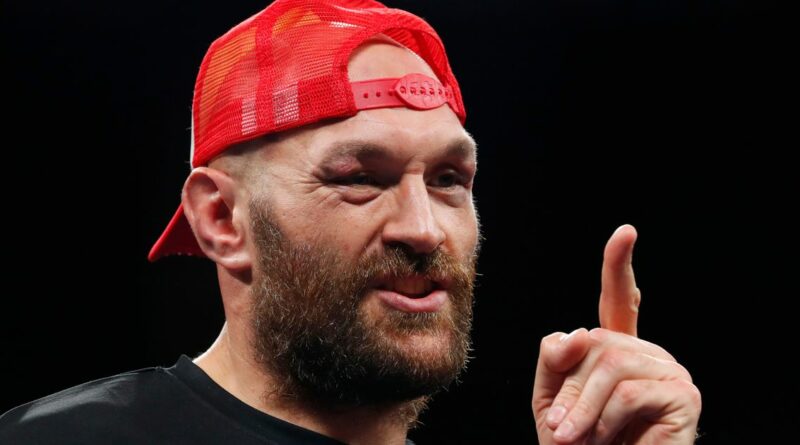 Tyson Fury predicted that Deontay Wilder would stop Anthony Joshua inside one round before his trilogy victory.

The 'Gypsy King' dispatched of Wilder in devastating fashion with a huge right hand in the eleventh round stopping the fight.

But he was forced to work hard in a real epic battle between the pair, that appeared to finally conclude the rivalry.

Although he previously admitted that Wilder would knock out Joshua in one round, before his defeat to Oleksandr Usyk.

"I'll deal with these guys later," Fury told Sky Sports when asked about Joshua and his promoter Eddie Hearn.

"The most important thing to me is Wilder, the most dangerous heavyweight in the world who would knock out Joshua in the first round.

"I've got to get past Wilder and then those guys will get their five minutes of fame. I'll give them the biggest beatdown they have had in their lives.

"As I've told Eddie Hearn, the difference between me and them is they are businessmen and I'm a Spartan. I've got nothing personal against Wilder – I don't care about belts, or that stuff being remembered. I care about smashing people."

Fury continues to be considered the leading heavyweight in world boxing, and proved his credentials with another tough victory.

And it displayed another incredible comeback having to return from a double-knockdown in the fourth round.

Will Fury ever take on Joshua? Let us know your thoughts in the comments section below.

But the punch stats revealed his overall control of the fight, using his jab to dismantle Wilder along the eleven-round distance.

The 33-year-old was pleased with his performance, and is ready to have a break before re-entering the ring.

"I give him the glory for the victory. He’s a tough man. He took some big shots tonight. It was a great fight, as good as any trilogy in history.

"I beat him three times and I’m a sportsman and wanted to give him some love and respect. And he didn’t want to give it back. That's his problem and I pray for him.

"This was a great fight and October 9, 2021 will go down in history, I hope. I always said I was the best in the world and he was the second best. Don’t ever doubt me. When the chips are down, I will always deliver.

"And I want to say if it wasn’t for Sugar (Hill), America's and Detroit's own, I wouldn’t have gotten through that fight tonight… He told me, he said get your jab working, big guy, and throw that right hand down the middle. That's how the big dogs do it.

Despite Fury's dominance, he did find himself behind on the scorecards going into the seventh round at midway.

But now he can celebrate his achievement, and was seen partying in Las Vega s after a historic victory.

Upon his ring return, another British challenger Dillian Whyte has been lined up to face the WBC champion.

But he must first beat Otto Wallin, to retain his declared status as mandatory challenger for the belt.

Mayweather breaks silence on boxing comeback after first round knock-out

Frank Bruno on the mend after contracting ‘knockout’ pneumonia