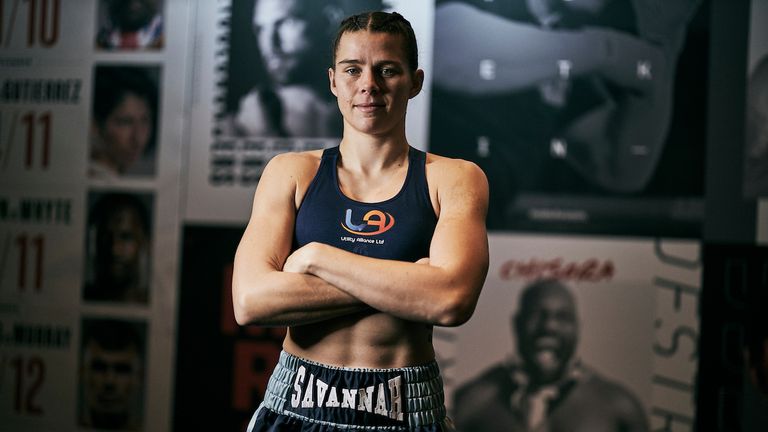 Hannah Rankin has threatened to pull Savannah Marshall into “deep waters” when they meet with a world title at stake.

The vacant WBO middleweight championship is up for grabs when Marshall fights Rankin on the undercard to Oleksandr Usyk vs Derek Chisora, live on Sky Sports Box Office.

“I’ve had much more experience and Savannah hasn’t had these tests yet,” said Rankin.

“I’ll pull her into deep waters. We’ll go into the last rounds – she will sink or swim.

“The Claressa Shields vs Savannah fight won’t happen after I take the world title home on Saturday.”

Marshall is the last person to beat feted American Shields, edging her in the amateurs. Shields has since won two Olympic gold medals and world titles in three divisions.

Rankin went the distance in an unsuccessful challenge of Shields.

“Whatever she brings, I have an answer for,” unbeaten Marshall said about Rankin.

“Hannah can’t out-box me so she has to take me out of my stride. But I’m bigger and stronger.

“I’ve rattled Hannah’s cage. I expect a tough fight from her.

“I boxed at light-heavy and super-middle – I feel sharper at this weight.”

"I'm a caged lion!" [email protected] is ready to make a HUGE statement on Saturday night.

The winner of Selby and Kambosos Jr will become the mandatory challenger to Teofimo Lopez’s lightweight title.

Former featherweight world champion Selby said: “I expect him to come out with pressure and high work-rate which will make for a great spectacle.”

Unbeaten Kambosos Jr said: “I’m a caged lion. It doesn’t matter who’s in front of me. I’m ready to make a huge statement.”

Tommy McCarthy’s trainer Peter Taylor said before they face Bilal Laggoune for the European cruiserweight title: “Tommy always had the ability but sometimes not the work ethic.

“I don’t see any way he can lose. Once he’s motivated, he is an unbelievable talent.”

"I just feel blessed to be part of the whole experience!" [email protected] makes her professional debut on Saturday night, live on Sky Sports Box Office from 6pm! ? pic.twitter.com/2byx2QAoE2

Ramla Ali, the amateur starlet managed by Anthony Joshua, will make her professional debut on Saturday.

Watch Usyk vs Chisora on Saturday, live on Sky Sports Box Office, from 6pm. Book it via your Sky remote or book it online here. Even if you aren’t a Sky TV subscriber you can book and watch it here.

Ederson insists players who suffer head injuries must be substituted immediately
We and our partners use cookies on this site to improve our service, perform analytics, personalize advertising, measure advertising performance, and remember website preferences.Ok