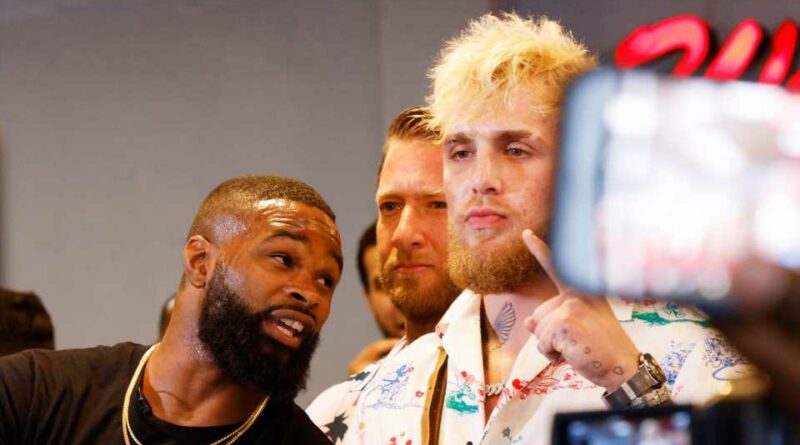 Paul, who has defeated YouTuber AnEsonGib, former NBA player Nate Robinson and former UFC fighter Ben Askren in his career, will face his most difficult test against Woodley, who has recorded the third-most knockdowns in UFC welterweight history (10) and a knockout record of a 7-2 during his MMA career.

Despite that challenge, Paul has remained very confident in his chances to record a fourth consecutive knockout victory.

“I believe in my ability, I believe in my skill and just my natural talents,” Paul said in an interview with MMA Fighting. “You’re either born with speed and knockout power or you’re not. I just so happen to have that. That’s why I know no matter happens, no matter how good Tyron is on Aug. 29, I’m going to still go in there and get the ‘W.’ He is serious and we’ve taken him more serious than any opponent thus far.”

Woodley, who was cut from the UFC roster following his fourth consecutive loss in March, will make his boxing debut against Paul. Woodley does not have a boxing background — he was a two-time All-American and Big 12 champion as a wrestler at Missouri — but said in an interview with ESPN that he has “always really been a boxer in a wrestler’s body.”

Even though he is 39 years old, Woodley said he plans on boxing “multiple fights” and has been training for that, evident in sessions in which he has prepared with pound-for-pound great Floyd Mayweather Jr.

“This is an opportunity for me to sprint into the boxing lane, but also I’m preparing accordingly,” Woodley told ESPN. “I’m preparing if I was fighting Canelo (Alvarez). I’m training like that right now.”

This event notably features a unified women’s featherweight title bout between WBF, WBO and IBO champion Amanda Serrano and challenger Yamileth Mercado as well as Tommy Fury — the half-brother of WBC and The Ring heavyweight titlist Tyson Fury — and Anthony Taylor at cruiserweight.

Here is everything you need to know about Paul vs. Woodley.

What time does Jake Paul vs. Tyron Woodley start?

The main card for Paul vs. Woodley will begin at 8 p.m. ET. It features bouts between cruiserweights Tommy Fury — the half-brother of WBC and The Ring heavyweight champion Tyson Fury — and Anthony Taylor, welterweights Montana Love and Ivan Baranchyk, heavyweights Daniel Dubois and Joe Cusumano and women’s featherweights Amanda Serrano and Yamileth Mercado, who are fighting for the WBC, WBO and IBO titles.

Paul and Woodley are expected to fight in the main event around 12 a.m. ET.

How to watch Paul vs. Woodley

Those who are hoping to watch Sunday’s fight can tune in via Showtime pay-per-view on all traditional cable and satellite providers. The bout can also be streamed on Showtime.com or the Showtime app.

Paul’s first fight on ShowTime will cost viewers around $60. Incidentally, this fight is priced higher than when Paul’s older brother, Logan, fought Mayweather on June 6 (that bout cost $49.99 on Showtime pay-per-view).

Where is Jake Paul vs. Tyron Woodley?

Paul will be fighting Woodley at Rocket Mortgage FieldHouse in Cleveland, Ohio. According to Evening Standard, there could be up to 20,000 fans in attendance for the fight.