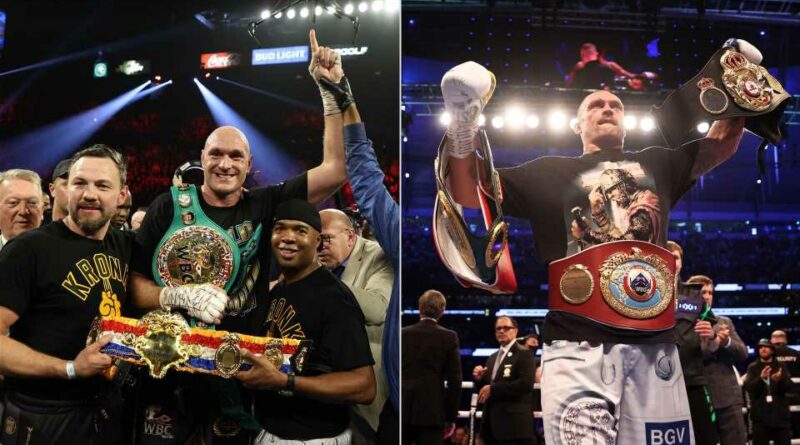 Tyson Fury (30-0-1, 21 KOs) will defend his WBC and The Ring heavyweight titles on Saturday against Deontay Wilder (42-1-1, 41 KOs) at the T-Mobile Arena in Las Vegas, Nevada. The fight will be broadcasted via a joint pay-per-view on ESPN and FOX Sports.

Fury, who won his belts in a second fight against Wilder in February 2020, is making his first defense of his titles. He is ranked as the No. 1 heavyweight by ESPN while Wilder is rated third in the division.

Fury and Wilder first fought in December 2018, which was called a draw. Wilder scored two knockdowns in the fight, including a vicious one in the 12th round that Fury recovered from, while Fury won the second bout by a seventh-round TKO.

The winner of Fury and Wilder’s third fight will hold two of the major titles in the heavyweight division. Oleksandr Usyk defeated Anthony Joshua on Sept. 25, winning the WBA (super), IBF, WBO and IBO belts.

The heavyweight division has not had an undisputed champion since Lennox Lewis in 2000, so Fury and Wilder’s result will have big implications for the sport’s history, along with a rematch with Joshua and Usyk.

Here’s a look at each title Fury and Usyk hold by each governing body.

The WBA has been around since 1921 and was referred to as the National Boxing Association until Aug. 23, 1962. The WBA can have up to four world champions in any given weight division, though Joshua holds the most important distinction with the super title.

American boxer Trevor Bryan is currently recognized as the world champion of the division, while Syrian Mahmoud Charr is the champion in recess.

Fury became the WBC champion on Feb. 22, 2020 by defeating Wilder, who previously held the belt since January of 2015.

Fury is yet to defend his title, as his third fight with Wilder in July was postponed after his camp suffered a COVID-19 outbreak. Fury became the third heavyweight to win the title in the past seven years, as Bermane Stiverne was recognized as the divisional champion from 2014 to 2015.

The WBC was formed in 1963, and its green belt portrays the 161 flags of the countries that represent the sanctioning body. Britain Dillian White is recognized as the interim champion at heavyweight and is the immediate challenger for the winner of Fury and Wilder.

Fury previously said if he defeats Wilder, he would like to fight Whyte in December.

The WBO, which was formed in 1988, was recognized as one of the four major world championship groups by the International Boxing Hall of Fame along with the WBA, WBC and IBF in 2004.

The WBO recognizes “super” champions, in which a boxer has held a multiple-fight contract with a major television network for multiple years and defended his title cumulatively for 10 bounds or against opponents of high recognition, among other criteria. Joshua has been labeled as a super champion along with Klitschko, while Usyk also earned the recognition at cruiserweight.

The IBF, which was preceded by the United States Boxing Association, has had eight champions since 2002: Lennox Lewis; Chris Byrd; Klitschko; Fury; Charles Martin; Andy Ruiz Jr.; Joshua; and Usyk.

The Ring is a premiere boxing magazine that began publication in 1922, which is also when it began awarding a linear title to each division.

Fury won The Ring’s vacant title in his second fight against Wilder. He previously earned it with his unanimous decision victory over Klitschko in November of 2015 but was stripped in January of 2018 due to inactivity.

The Ring’s initial policy was to award a championship based on a linear reign, or “the man who beat the man.” Now, the vacancy can be filled if the No. 1 and No. 2 contenders fight one another, or a champion could lose his belt from one of the following seven conditions:

1. The champion loses a fight in the weight class in which he is champion.

2. The champion moves to another weight class.

3. The champion does not schedule a fight in any weight class for 18 months.

4. The champion does not schedule a fight at his championship weight for 18 months (even if he fights at another weight).

5. The champion does not schedule a fight with a top-five contender from any weight class for two years.

7. The champion tests positive for a performance-enhancing substance and is fined, suspended or otherwise penalized by the proper authority (athletic commission or sanctioning body).

Other belts and former undisputed champions

Usyk also has the International Boxing Organization belt, though it is considered a “minor” championship as it is not recognized as one of the “big four” governing bodies.

If Joshua, Wilder, Fury or Usyk meet to unify world titles from all of the major sanctioning organizations, the heavyweight division will have its first undisputed champion since Lennox Lewis in 2000. The division has not yet had an undisputed titleholder in the four-belt era.

Here is a list of undisputed heavyweight champions in boxing’s history.