Home » Boxing » Why Tyson Fury was banned from Wikipedia

Tyson Fury has revealed he was banned from Wikipedia for editing Wladimir Klitschko’s page.

The former heavyweight world champion outpointed Klitschko three years ago to unify the division before he retired from the ring.

But as part of the pre-fight mind games, Fury would edit the online encyclopedia.

When asked if the story was true, Fury told BT Sport: "Yes it is true, until I got banned from Wikipedia.

“I did it because it I wanted to prove that, because it is a public site, anyone can write whatever they want on there. If you want to go on and edit my profile, you can.”

"I have never edited anything on mine but because I am the lineal champion, someone keeps going on and writing I am retired, I am clearly not retired.

"So I keep changing it back to active and someone else keeps changing it to retired. Someone obviously wants me retired."

Fury was then asked if he thought the person editing his page came from Alabama – home of Fury’s next opponent Deontay Wilder .

But he said: "It might be coming from London somewhere," in reference to Fury’s domestic rival Anthony Joshua .

Fury is currently preparing to face Wilder in Los Angeles on December 1.

The 30-year-old is bidding to win the only belt that has eluded him so far in his career – the WBC strap.

But he will have to do so having had only two warm-up fights since he returned from a two-and-a-half year hiatus.

Following his shock win over Klitschko, Fury hit the drink and drugs as his life spiralled out of control.

He admitted to coming close to killing himself before turning his life around and returning to the ring.

And victories over Sefer Seferi and Francesco Pianeta set up him for a shot at Wilder. 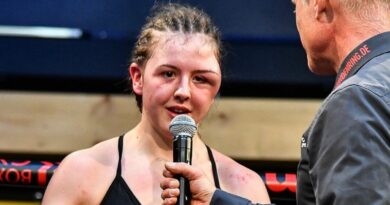