Caleb Ewan heard crunching carbon behind him as he powered to his first WorldTour victory of the season at the Tour Down Under on Wednesday, winning the crash-marred second stage to take the race lead.

Ewan (Lotto Soudal) demonstrated his versatility on the uphill drag to the finish in Stirling, surfing wheels to pip defending champion Daryl Impey (Mitchelton-Scott) and Nathan Haas (Cofidis) in a reduced bunch sprint. 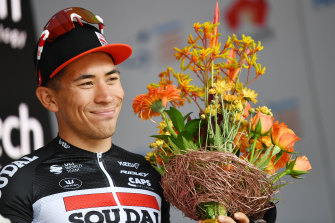 Caleb Ewan claims stage two of the Tour Down Under.Credit:AAP

It was redemption for the Australian sprint sensation, who blamed his teammates after he lost position and finished seventh behind Sam Bennett (Deceuninck-Quick-Step) on stage one.

"There's been plenty of times where we've stuffed it up and haven't got the result we wanted but we've always seemed to bounce back. The boys came out much better today and delivered me really well," Ewan said.

"I need the easiest ride possible and they gave me that and they delivered me right near the front of the bunch in that last two kilometres. From there, I found the wheels by myself and set myself up for a good sprint.

"We always know coming here it's going to be a pretty tough day and it's one of those days that can go either way. It can be a sprinter like me getting to the finish and winning or it can be guys like Daryl, but I think today was mixed, it was a mixed top 10. Those guys [Impey and Haas] are puncheurs and I'd say I'm more a pure sprinter so it's one of those exciting stages for cycling because it's hard to pick before the start."

Ewan attributed opportunity and nerves to a crash inside the last 1.5km of the 135.8km stage that saw Simon Yates (Mitchelton-Scott) and sprint rival Elia Viviani (Cofidis) among others bleeding as they crossed the finish line.

"I was ahead of them all but I could hear them. It's never a nice sound hearing crunching carbon," he said.

"It's one of those finishes where a lot of guys sit up so there is always a few gaps opening up in the bunch. The GC guys don't want to be caught behind any of those gaps and all the sprinters and puncheurs going for the stage want to be at the front as well.

"That basically means every team wants to be at the front and it was quite easy today, compared to normal, usually it's a bit harder around here, the whole bunch got to the line, which made it really nervous in that last part."

Yates suffered a deep laceration on his left knee, which was heavily bleeding as medics bandaged it outside the team van at the finish. Viviani's back and arms were covered in road rash and he did not ride back to his hotel with teammates.

Earlier, Rohan Dennis (Ineos) had a front wheel puncture with about 15km remaining but his teammate Luke Rowe paced him back onto the bunch so the Australian remains in contention for general classification ahead of Thursday's first hill-top finish at Paracombe.

Teenage freak’s history making NBA run
We and our partners use cookies on this site to improve our service, perform analytics, personalize advertising, measure advertising performance, and remember website preferences.Ok