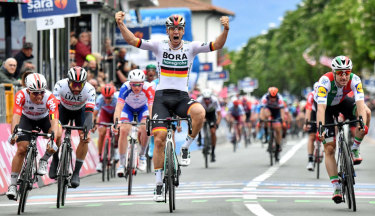 Pascal Ackermann claims the second stage of the Giro d’Italia ahead of Elia Viviani (right) and Caleb Ewan (left).Credit:ANSA/AP

Ackermann timed his sprint to perfection to win the 205-kilometre stage from Bologna to Fucecchio on Sunday.

The Bora-Hansgrohe rider just avoided a rider crashing in front of him during the finale before outsprinting Elia Viviani (Deceuninck-Quick-Step) and Ewan (Lotto-Soudal).

"It was our first chance to win a stage and we did it straight," said Ackermann, who is making his grand tour debut. "We were super motivated. It bodes well for the rest of the Giro."

Slovenian Primoz Roglic (Jumbo-Visma) retained the overall leader's pink jersey after finishing in the peloton on a rainy day as the race left Emilia-Romagna for Tuscany.

He maintains a 19-second lead over Briton Simon Yates, riding for the Australian Mitchelton-Scott team, and 23 seconds over two-time winner Vincenzo Nibali of Italy and Bahrain-Merida.

The pressure of controlling the race now lies on the shoulders of Roglic's Jumbo-Visma team, which could have consequences later in the race.

"They will have a lot of work because the next stages are over 200 kilometres and the weather is also not the best weather," Paolo Slongo, Nibali's coach, told reporters. "Their team will suffer from these long, hard stages."

Asked about Nibali's form, Slongo said that the 34-year-old would hit his peak during the final week.

"We prepared him to be at his best for this Giro d'Italia, which is the main goal of his season," the Italian said.

"We shaped him step by step so that he can perform for the Giro, but he will be at 100 per cent in the last week when the hardest climbs come. If, in that final week, you feel the fatigue of the first weeks, then the race is hard to manage."

In 2016, Nibali leapfrogged Colombian Esteban Chaves to take top spot on the penultimate day with a perfectly executed attack during the last mountain stage.

This year's toughest stages are the 16th and 20th, featuring gruelling climbs on which the race is likely to be won and lost.

Monday's third stage will take the peloton over 220 kilometres from Vincio to Orbetello.