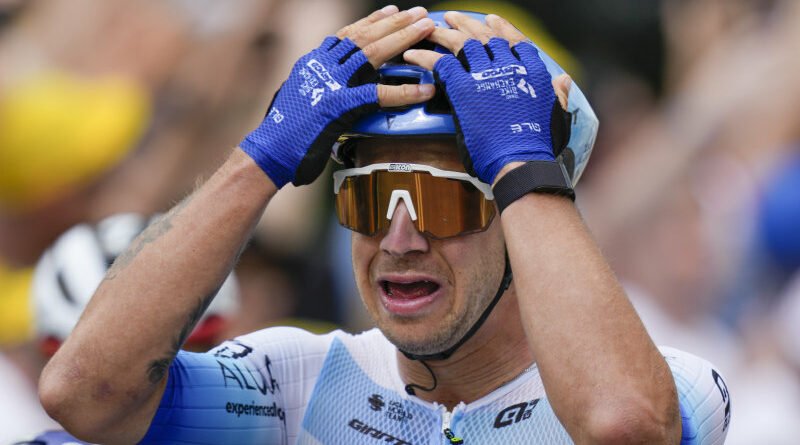 Dylan Groenewegen – two years after receiving death threats and being ridiculed to the point that he wept – has fully exorcised his mental demons, winning stage three of the Tour de France on Sunday.

The Dutch sprinter recovered ground and deftly manoeuvred to find a patch of open road before he pipped Wout van Aert (Jumbo-Visma) and Jasper Philipsen (Alpecin-Deceuninck) on the line, putting a much-needed victory on the board for his Australian-registered BikeExchange-Jayco team. 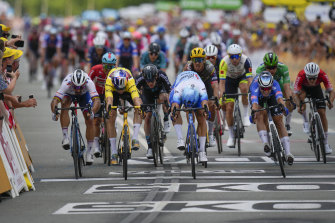 Australian Caleb Ewan (Lotto Soudal) was visibly frustrated after he got boxed in at the end of the 182-kilometre flat stage from Vejle to Sonderborg in Denmark, missing one of few opportunities for sprinters at this year’s race.

Groenewegen’s return to the top of the sport ends a sorry tale that threatened to derail his career and that of rival Fabio Jakobsen (Quick-Step Alpha Vinyl), who won stage two on Saturday in what is his race debut.

The pair have been linked since their involvement in a horrific, high-speed crash at the 2020 Tour of Poland, which divided public opinion, the peloton and left both physically and figuratively broken.

They were sprinting with victory in sight when Groenewegen squeezed Jakobsen into the barrier. Jakobsen was placed into an induced coma after he crashed through the barrier. He also suffered severe facial injuries, which required multiple reconstructive surgeries. 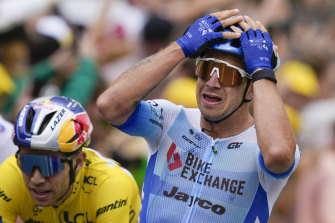 Groenewegen broke his collarbone but what came next was worse. The 29-year-old was suspended from competition for nine months for his involvement in the incident, which had mitigating factors, and he needed local police protection at his home after receiving death threats.

That both the men returned to racing – and to the top echelon of the sport – and have now won on its biggest stage is a testament to their talent, resilience and determination.

Groenewegen appeared emotional on Sunday but, speaking post-race, maintained his composure after he successfully navigated what was a technical finish, with tight and wide turns, left and right, to firmly put the past behind him.

“Not physically but mentally it was a hard time, of course. This is for my wife and my son,” he said.

“I want to say thanks to my team, my family and my friends to bring me back to the Tour in good shape.”

Groenewegen joined BikeExchange-Jayco this year in what was a fresh start following a long tenure at Dutch squad Jumbo-Visma.

Sprinters are often likened to brash boxer stereotypes but Groenewegen is typically a man of fewer, soft-spoken words with the press and has let his legs do the talking since his return to competition in May 2021, claiming nine victories.

Speaking before the start of the Tour, BikeExchange-Jayco sports director Matt White was confident his star signing would perform in his return to the race following a two-year hiatus and despite the mental and emotional challenges he’s faced.

“Anyone would be lying to say you forget about things that happen like that in your career,” White said.

“It was an accident and, in my opinion, he was judged pretty harshly over it really. But at the end of the day, you’ve got to move on.”

However, Cyclingnews reported Jakobsen did not congratulate his rival after the bunch sprint finish in Sonderborg, where he placed fifth.

“He shows that he’s a good sprinter,” Jakobsen said post-race.

“I have to say that before the crash I admired his palmares [CV] and I kind of looked up to him a bit. But now that is completely gone after the crash because of the mistake he made. I think that’s normal.”

The win was a coup as much for Groenewegen as it was BikeExchange-Jayco, who under a newly introduced promotion/relegation system are facing relegation at year’s end.

The squad had a winless 2021 Tour campaign, but Melbourne backer Gerry Ryan, speaking after Groenewegen’s victory, was confident of more success at the 109th edition.

“It’s planning persistence and having the right people and the right team,” Ryan said.

“I’m sure there’s going to be more during the Tour. Persistence paid off today and we won.”

The headline sprinters were all clear of a crash that reduced the field with about 10.5 kilometres remaining.

The Tour will now move from Denmark to France, with racing to resume on Tuesday with stage four from Dunkirk. 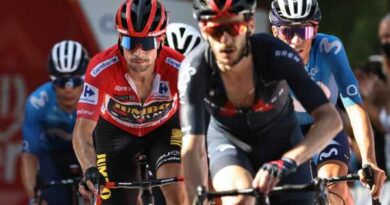 Vuelta a Espana 2021: Stage 9 preview, route map, prediction and start time for a brutal end to the week 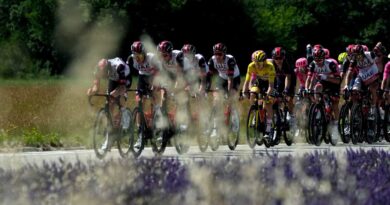