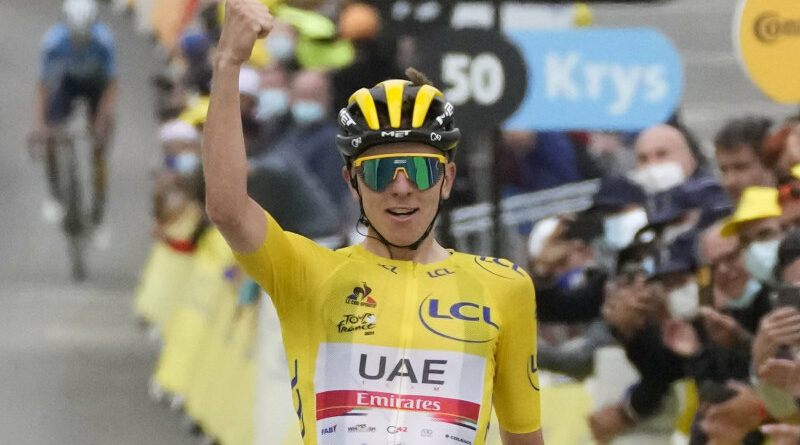 Tadej Pogacar claimed another landmark victory in the 18th stage of the Tour de France to edge closer to retaining his title as a cloud of doping suspicions hung over the world’s greatest cycling race on Thursday.

Before the start of the stage, the French prosecutor’s office said it had opened a preliminary investigation into the Bahrain Victorious team after police searched the outfit’s accommodation and bus on Wednesday. 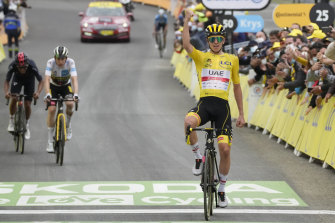 The prosecutor’s office in Marseille said the investigation was into “acquisition, transport, possession, import of a prohibited substance or prohibited method for use by an athlete without medical justification”.

Bahrain Victorious said they were complying with the investigation.

“I don’t know about this, it’s something completely strange,” UAE Emirates rider Pogacar told a news conference. “I guess it’s just one more control to see that nobody’s hiding anything and I think the results of the raids were good.

“We just found about it in the morning. It’s one more thing to control the sport.”

All Bahrain Victorious riders started the stage but none of them weighed on the race, having been kept up by the searches deep into the night, with Dutchman Wout Poels falling behind Pogacar in the mountains classification. 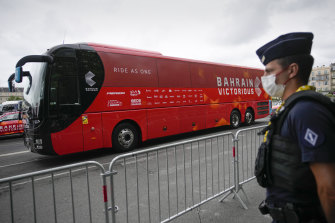 The Bahrain Victorious team bus is parked before the start of the 18th stage of the Tour de France.Credit:AP

The Slovenian’s brutal acceleration 500 metres from the line, at the top of Luz Ardiden (13.3km at 7.4 per cent), could not be matched by his rivals as Denmark’s Jonas Vingegaard and Ecuador’s Richard Carapaz finished two seconds behind in second and third respectively.

The result was a carbon copy of Wednesday’s summit finish at the Col du Portet, where Pogacar had already beaten Vingegaard and Carapaz in the second of his three stage wins in this year’s Tour.

“I can’t believe what’s happening to me. Today was a really big stage. My legs were not at 100 per cent and I suffered in the Tourmalet,” said Pogacar.

“The ascent to Luz Ardiden was tough, too, but I found my rhythm and I had enough energy for the final sprint.”

Overall, Pogacar now has a massive advantage of five minutes 45 seconds over Jumbo-Visma’s Vingegaard with Carapaz of Ineos Grenadiers in third place overall, a further six seconds behind.

Colombian Rigoberto Uran (EF Education-Nippo), fourth overall at the start, cracked in the penultimate ascent to the Col du Tourmalet to drop out of the top 10.

Early attackers Matej Mohoric of Bahrain Victorious and world champion Julian Alaphilippe were joined in the ascent of the Tourmalet (17.1km at 7.3 per cent) by a small group featuring French climber David Gaudu.

Gaudu, whose monster work had set up Thibaut Pinot for a landmark win at the Tourmalet in 2019, accelerated and was followed by Alaphilippe, fellow Frenchman Pierre Latour and Portugal’s Ruben Guerreiro.

A cooked Alaphilippe was dropped 3.5km from the top with Guerreiro also being left behind 2km further up as French president Emmanuel Macron watched from the Tour director’s car.

Gaudu broke clear in the descent but he only had a 15-second advantage on an Ineos Grenadiers-led yellow jersey group at the foot of the final climb.

He was caught 9.5km from the line.

Pogacar attacked first, 3.5km from the top, with Vingegaard, Carapaz, Spain’s Enric Mas and American Sepp Kuss the only ones to follow.

Kuss flagged before Mas started his sprint 700 metres from the line, only for the 22-year-old Pogacar to speed past him with 500 metres left, leaving Vingegaard and Carapaz to fight it out for second after the 129.7km ride from Pau. 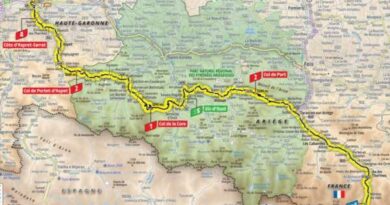