Richmond are soaking in their third premiership triumph in four seasons, but for one player the shine has been taken away.

As the rumours begin to swirl ahead of free agency and the trade period opening, one player’s father has copped a brutal clip for his role in negotiations.

Big name players are up for the taking as clubs prepare to reshape their rosters ahead of the 2021 AFL season.

Stay up to date with all of the latest news and rumours right here.

TIGERS STAR TOLD HE MAY BE OFFLOADED

He may not have been on the field to taste premiership success, but Jack Higgins has proven to be a fan favourite among the Tigers faithful.

The 21-year-old is contracted for 2021, but has reportedly been told the club may look to trade him this off-season.

“Jack Higgins, definitely gettable is the term we throw around at this time of the year, he has been told there’s a chance that he will be traded. He’s got one year to go (on his contract),” Sam Edmund said on Trade Radio.

Cooney added: “He’s one that would slot into that Carlton forward six really well.

“We spoke earlier about Alex Sexton, I’m not sure he’s the type of player Carlton needs in their forward line.

“I’d love to get Jack Higgins if I was a Carlton supporter. He’s a pressure player, kicks mercurial goals and just tackles and harasses and that’s what they need down there at the feet of those big boys.”

The Blues have long chased a small forward, after unsuccessfully attempting to lure Sydney’s Tom Papley.

Jordan de Goey is looking to put pen-to-paper on a new two-year deal after he was reportedly shopped around to rival clubs.

The mercurial star was linked to Carlton, but the Blues are said to have never flagged their interest with the push coming from the players end.

AFL media’s Mitch Cleary however delivered a shot to the star’s father, Roger, who is currently managing his son.

Cleary says the father’s inexperience with contract negotiations is causing issues with the club.

“The Carlton interest was more from De Goey’s side and exploring a club with money,” he said on AFL Trade Radio’s Trade Mornings.

“I don’t think (De Goey being managed by his father) has helped – if you have an experienced manager who has done this before, they know the timeline.

“How hard do you go; his old man is a fireman and he’s not trained to do this. A manager at this time of year is critical to know what your value is when the right time to go harder or pull back.”

“He as a player wouldn’t really know his value,” he said.

“He would only know what we as the general public would know, whereas players rely on managers. De Goey is 24 and doesn’t have the experience, when you get to 28 you have a better understanding of what you’re worth. 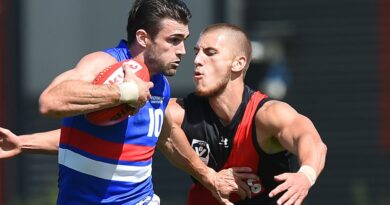 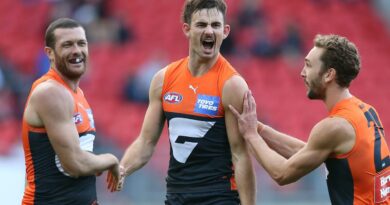