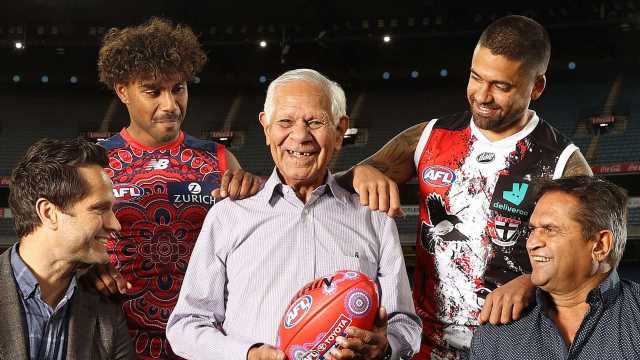 Melbourne young gun Kysaiah Pickett says being a part of this iconic image representing the past, present and future of the Indigenous contribution to Australian football was one of the one of the greatest moments of his life.

Pickett was humbled to be a part of a special Sunday Herald Sun photograph alongside three members of the Indigenous Team of the Century Syd Jackson, Nicky Winmar and Gavin Wanganeen as well as three-time premiership player Bradley Hill.

The quietly-spoken Demon, who is one of the game’s most exciting young players in only his second AFL season, expressed his delight at being asked to be a part of the photo shoot.

“It’s special to be a part of it along with Gavin, Syd and Nicky, who are all legends of the game (as well as Brad Hill),” Pickett said.

“I don’t think I have ever had a photo with anyone like them before. For me personally, it is probably one of the best moments of my life.”

Watch the 2021 Toyota AFL Premiership Season. Every match of every round Live on Kayo. New to Kayo? Try 14-Days Free Now

The five players pictured in the middle of the Melbourne Cricket Ground represent the decades from the late 1960s through to 2021, highlighting the rise of Indigenous influence and participation at the highest level of the game.

Pickett and Hill are among more than 80 currently-listed Aboriginal footballers on AFL club lists, whereas Jackson was only one of a handful of Indigenous players in his eight seasons for Carlton from 1969 to 1976.

The Herald Sun and News Limited newspapers across the country have this week launched Indigenous Month, showcasing the best of sport from our First Nations people.

The AFL will also celebrate the Indigenous connection to our national game, with its Sir Doug Nicholls Round, which this year runs across Round 11 and Round 12.

Sir Doug Nicholls epitomised the spirit of Reconciliation in his life.

He was an outstanding athlete as well as a fine footballer, playing 54 games for Fitzroy.

He was also the first Aboriginal person to be knighted, was Governor of South Australia and was a leader in trying to look after the welfare of Aboriginal and Torres Strait Islander people.Fitzroy also produced the first Indigenous player to play VFL football — Joe Johnson — who played 55 games from 1904 to 1906, playing in two premierships.

They call him ‘Uncle Syd’ with the reverence reserved for one of the game’s Indigenous pioneers, but dual Carlton premiership player Syd Jackson was every bit as pleased to meet up with the other members of this photo.

“It’s sensational to be here and to see these fellows,” 76-year-old Jackson said.

Now a father figure to a generation of Indigenous footballers, Jackson was taken from his mother at a young age and brought up in Roelands Native Mission, near Bunbury, in the southwest of Western Australia.

But this gentle soul found football as his pathway in life, starting with South Bunbury seniors as a 16-year-old, the same year he left the mission.

Leading the way … Syd Jackson is seen as one of the game’s Indigenous pioneers.Source:News Limited

He then took his considerable talent to East Perth in the WAFL. There, he found two Indigenous footballers who guided his pathway, the legendary Graham ‘Polly’ Farmer and Tom Kilmurray.

“They were my idols and I modelled myself on them a little bit,” he said.

“They gave me the inspiration to go on with it as well.”

Jackson was racial abused by opposition fans when he moved to Carlton — he played in the 1970 and 1972 premierships with the Blues — but instead of complaining, he preferred to make the opposition pay as it spurred him onto better performances.

“I used it as a bit of a platform to get me fired up and to play even better,” he said.

“It never really worried me. It was a part of the game back then.”

He watched with pride the next wave of Indigenous footballers who came after him.

“It was great to see the likes of Nicky Winmar and the Krakouer brothers come through later. They were all so clever. You wonder how these guys got around the opposition sometimes. Their opponents didn’t know where they were half the time.”

The AFL has honoured Jackson this year as one of the pioneers and his place in the game – already secure – has thankfully won a new audience in recent years.

Early in his VFL career Nicky Winmar used to counter racism directed at him on the field by getting the ball and running away from the abuse.

“We tried to run away from them with the footy, so you wouldn’t hear it,” Winmar explained.

That all changed in a game at Victoria Park in 1993 when he famously made a stand after copping a torrent of abuse from the crowd.

He lifted his St Kilda jumper and pointed to the colour of his skin to express his pride in his heritage in a seismic moment for Australian football.

“I still remember that day … I will never forget it,” he said. “I am proud of what we did (on that day) and so proud of what the next generation have done as well.

Nicky Winmar lifts his jumper and proudly shows off his skin colour in 1993.Source:News Corp Australia

“Things have gotten a bit better, but I still think we have a long way to go.

“It is all about respect for Indigenous people, not just in football, but all around the country.”

Winmar said the recent photo marked the first time he had been back on the MCG turf since his 251st and final AFL game in 1999.

Tony Lockett and Winmar are mobbed by fans after winning by 131 points over the Adelaide Crows in 1994.Source:Herald Sun

As a kid growing up in Western Australia, he had marvelled at the Indigenous talent of players such as Maurice Rioli, Barry Cable and ‘Polly’ Farmer.

Now he loves watching the next generation of stars.

“Gee, Kozzy (Pickett) is good to watch, so is ‘Hilly’,” he said. “I still love seeing Paddy (Ryder) play and all the boys from Brisbane and Sydney.

“There are still more players to come through and still more stories to be told.”

The AFL’s first Indigenous Brownlow Medal winner, Gavin Wanganeen, said it warmed his heart to catch up with Jackson, Winmar and Co in the middle of the MCG.

It’s the venue that brings back so many good memories.

“It’s always a wonderful feeling stepping out on the MCG,” Wanganeen said.

“I played in the two premierships here — in 1993 with the ‘Baby Bombers’ (in the Year of Indigenous People) and in 2004 in Port Adelaide’s first ever AFL premiership.”

1993 Brownlow Medal winner Gavin Wanganeen says stepping out on the MCG for the photo shoot warmed his heart.Source:News Corp Australia

“It’s awesome to be back here and so special to meet with the Indigenous greats such as Uncle Syd, who was one of the pioneers, and Nicky, as well as the up and coming stars such as Brad and Kozzie.

“We are like family whenever we get together. We have connections as Indigenous players and we’ve got a great camaraderie.”

His heroes were Winmar and Gary Ablett Sr., when he was growing up in South Australia.

“Nicky Winmar was one of my idols because of the marks he used to take,” he said. “He will tell you about them all and he took plenty of them.”

Winmar says he now loves watching the next generation of stars and seeing their stories unfold.Source:News Limited

“I flew for my marks and always aspired to take marks like Nicky, but I couldn’t get myself up as high as he did. I threw myself into packs instead.”

He praised Kevin Sheedy’s commitment to Indigenous footballers as a game changer during his time at Essendon and lauded the help he received from Michael Long, in particular, as well as Derek Kickett in his time with the Bombers.

He loves watching ‘Kozzy’ Pickett now. “You can’t go past Kozzy … he hasn’t even scratched the surface.”

Wanganeen said the catch-up reminded him of family: “We have connections as Indigenous players.”Source:News Limited

“I know Kozzy through his uncle Byron. I love the way he takes the game on with his skills, his power and his speed. He is a fan favourite at the moment.”

Not many players get the chance to play with one of their sporting heroes, but Brad Hill got that chance when he was at Hawthorn.

Cyril Rioli was Hill’s sporting hero as he aspired to reach AFL levels.

He was lucky enough to not only be a teammate of the former Hawks superstar, but to also play in three premierships with him, from 2013-2015.

Hill was only seven when Cathy Freeman won the 400m gold medal at the 2000 Sydney Olympics, but it is also a moment that inspired him.

He has endlessly watched it on YouTube. “It’s a big part of my life, obviously being Indigenous Australian means a lot and obviously there is a lot of history behind our culture and our people,” Hill said of his heritage.

“I love being able to say that I’m Indigenous and I feel like a lot of the skills I have now come from that side of the family with my football side of things.

“And just how close we are as a family and how big our families are as Indigenous people is something good to have growing up and something you enjoy having … a lot of cousins and aunties and uncles around. We’re a pretty tight group. Family means a lot to us.”

Hill says one of his biggest influences was Cathy Freeman winning gold in 2000.Source:Getty Images

As the nephew of Norm Smith Medal winner Byron Pickett, he always knew his football pedigree would be a part of his future.

“I watched Cyril and Eddie; they were the main two I watched,” he said. “Every weekend I watched footy to see them play and watch them kick the goals they kick.

“I just looked up to them, the way they play, and the things they did off the field with Indigenous people. I think they are really good role models for me and for others.”

Family and his Indigenous background have always loomed large in his life, and the loss of his mum earlier this year was a devastating blow.

But Pickett, who turns 20 on Tuesday, has honoured her with his football so far this season, playing a key role in Melbourne’s 2021 resurgence.

He was happy to play a part in the Sir Doug Nicholls Round, saying: “It’s a proud moment for all of the Aboriginal players.”

“It is a round where we can express ourselves and help the other boys who are not Indigenous to understand and learn more about our culture.” 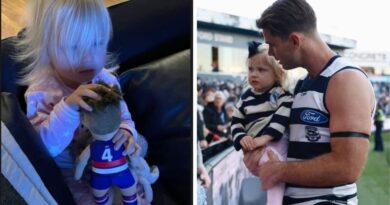 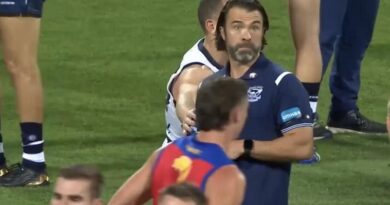