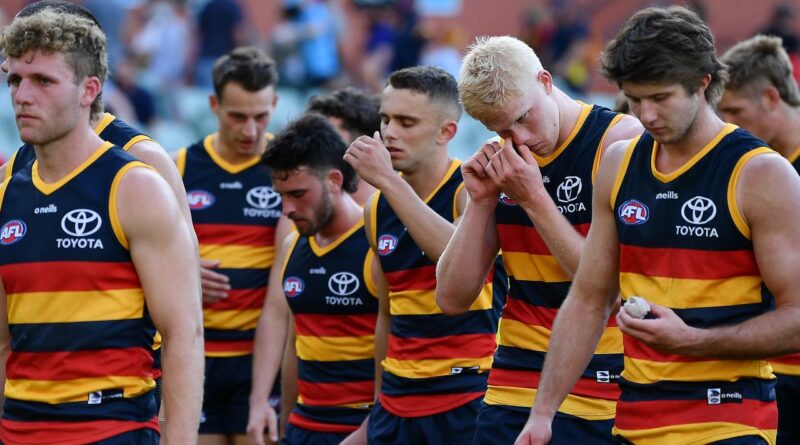 Adelaide is optimistic captain Rory Sloane will return for the Showdown next weekend after being sidelined for four weeks following surgery to repair a detached retina.

If the onballer has his way, he would front Port Adelaide at Adelaide Oval on Saturday night, according to Crows coach Matthew Nicks.

However, while Sloane has returned to training and will push for selection, Nicks said the club needed to be mindful of the injury.

The absence of Sloane was emphasised on Saturday when the Crows were smashed around the ball by GWS Giants, the key factor in the poor 67-point loss.

Defender Luke Brown, missing due to an Achilles issue, is also a chance to return for the Showdown while Darcy Fogarty will play in the SANFL on Sunday after failing to get on the ground as the medical sub against the Giants.

What Nicks also wants to see return against the Power is the fighting spirit, claiming the Crows did not put on the gloves and enter the ring against the Sydney outfit in the first half.

He also described the performance as unacceptable and a big step backwards for the club in its rebuilding process.

“We were comprehensively beaten by a very good football side,” Nicks said. “We unfortunately helped them beat us up.

“In the first half we did not come to compete, we were a half metre off and that is too far when you are up against the likes of that midfield.

“That hurts our group because it is what we want to base our game on. We want to compete, and at worst when you play the best sides in that space, you want to at least break even and give yourself a chance in the contest.

“We got hammered in that stat to half time. Not only are we being beaten up in the contest, we are second to the ball as well.”

Nicks added the Giants deserved credit, saying their midfield showed the Crows up.

He said the Crows were a young group facing challenges performing at the level the club is seeking.

“But that drop off today, there is no hiding from it, it is unacceptable at AFL level,” he said. “It does not take much and I talked a lot about that when we weren’t performing last year, the difference between playing at the level and not is not a lot.

“Unfortunately today it was across the board.”

GWS Giants coach Leon Cameron has called on the AFL to have a “really good, mature discussion” in the wake of an avalanche of injuries this season.

He joins fellow coaches Chris Fagan, Brett Ratten and Ken Hinkley in appealing to the AFL over the past fortnight to address the game’s growing casualty ward.

The Giants, hard hit by injuries, added Brent Daniels, Matt Buntine and Sam Reid to the list of wounded following the 67-point smashing of Adelaide at Adelaide Oval on Saturday.

Acknowledging he lacked the answers, Cameron said it was a great debate and unless there was a discussion on the matter “we” are putting our head in the sand.

“It is a combination of everything,” he said. “It was faster in the first three or four rounds because of the rule changes.

“We are back to 120 plus minutes and have less rotations. A couple of coaches have talked about shorter games, it is a hard one.

“The facts are there have been a lot of injuries and if we don’t look into it and have a really good discussion, a mature discussion, in among the AFL and key people, we are putting our heads in the sand.

“There are a lot of injuries out there. Some sides are lucky at the moment, but a lot of sides are missing really good, key players.

“The fans want to see our players as much as possible. This is such a taxing game, it is so hard, and that is why I’m proud of the guys today.

“It was 28 degree heat and challenging with two or three players down.”

Cameron said there was no certainty Shane Mumford would front Essendon at home on Saturday as the club managed the veteran.

The ruckman dominated against the Crows and Cameron joked he would have a grease and oil change on Tuesday and Thursday before a decision was made on his immediate future.

“He is pushing 35 and unbelievably good today,” Cameron said. “He probably plays at his best three games in a row, he had two last time and then a rest.

“The midfield grows a leg when he is there, but equally they are liking Matty Flynn performing his craft as well. Kieren Briggs is banging the door down.

“Mummy is coaching them as well as playing so it is a wonderful story.”

Cameron described the win as first class on the road, claimed defender Sam Taylor was unheralded outside the club and said the club will continue to blood youngsters.

Brownless and Lyon bury the hatchet 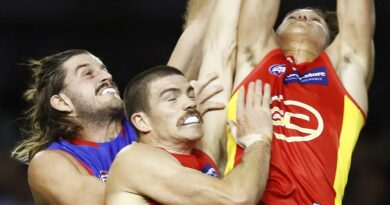