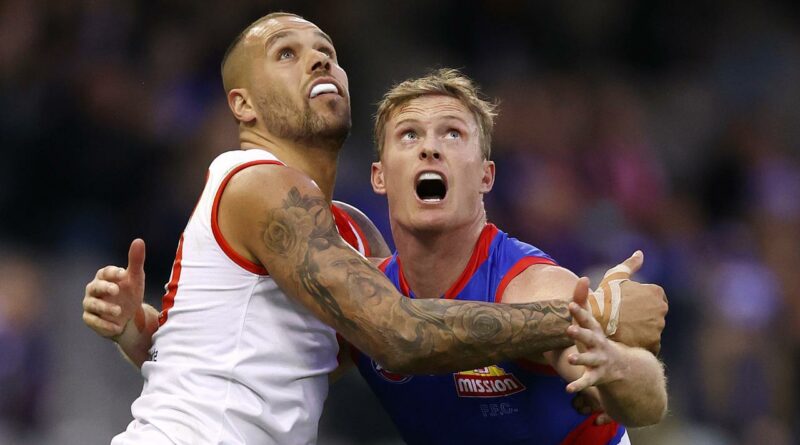 Sydney have sent a statement to the rest of the competition with an impressive 19-point victory over the Western Bulldogs at Marvel Stadium.

The Swans backed up their 92-point thumping over West Coast a week prior, completely stifling their opponents and taking complete control of the outside game (229-192 uncontested possessions) while out marking their opponents by 56.

Coming home with their tenth win of the season not only puts them within a game of the top four but carries extra significance given New South Wales being declared a ‘red zone’ during the game – casting extra doubt over when Sydney can return home.

Despite being right in the game for most of the contest, the Bulldogs were wasteful in key moments – squandering guilt-edged opportunities to get back into the game, ultimately missing a chance to go back on top of the ladder.

In a seesawing opening quarter, both sides traded goals but the Swans’ control of the uncontested ball (75-37 in first quarter) allowed them to assert themselves on the contest – taking a slender six-point lead into the first break.

The Bulldogs railed but were unable to make the most of their chances in front of goal with Josh Bruce in particular missing a great chance to give them the lead.

Following the major break, the Swans’ stranglehold of the contest kept the home-side at an arm’s length before Luke Parker’s late snap extended the margin to 20.

After a brief Bulldogs final-quarter resistance and a couple near chance, Lance Franklin finally broke his duck – putting the game to bed with his 977th career major.

Jordan Dawson had a blinder in the Swans’ win. Picture: Getty ImagesSource:Getty Images

With the game in the balance early, Jordan Dawson helped tip the scales in Sydney’s favour early.

Not only was Dawson brilliant with his ball-use off halfback, but he was equally prolific in front of goal kicking three goals inside the opening quarter and a half to help build an early advantage following a seesawing opening.

His third, in particular, coming at a point which gave the Swans a fourth straight goal and a 17-point lead.

‘Buddy clone’ Jamarra Ugle-Hagan has a moment with the Swans’ superstar after the match. Picture: AFL Photos/Getty ImagesSource:Getty Images

After weeks of biding his time in the VFL, Jamarra Ugle-Hagan finally made his much-anticipated debut.

The Bulldogs fans inside Marvel Stadium rose in anticipation each-time the ball came near the no.1 pick as he used his large frame to impose himself aerially in the early stages of the contest with his dropped mark leading to a Caleb Daniel goal.

Unfortunately, his first game ended up without a first career victory and goal finishing with six disposals and two marks.

It was a Joel Amartey party at Marvel Stadium.

In the dying moments of the second term, Taylor Duryea’s casual kick across the face of goal was intercepted by Amartey’s foot – who cleverly volleyed the ball home with a finish straight from the wheelhouse of a striker at the Euros.