Following Bryson DeChambeau’s monster win in Dubai last week, there was some chatter (as there often is with DeChambeau) about pace of play. Below is one of many clips from Dubai in which DeChambeau deliberated on an approach shot.

DeChambeau consistently flies by these numbers, sometimes doubling or even close to tripling the 45 seconds, and he’s not the only one. But he might be the most prominent one.

“It’s actually quite impressive that we’re able to get all that stuff done in 45 seconds,” said DeChambeau this week at the Saudi International. “People don’t realize that it’s very difficult to do everything we do in 45 seconds.

“I think that anybody that has an issue with it, I understand, but we’re playing for our livelihoods out here, and this is what we want to do. If we want to provide the best entertainment for you, it’s part of our process. It’s part of my process, at least. Some people don’t do what we do and they are successful, right. But they have got loads of experience that I haven’t really necessarily had, so I have to find another way to be just as consistent as them without the experience.”

Somewhat humorously, Dustin Johnson was asked it he’d ever be able to play golf like DeChambeau with talk of air density and all the things that roll through DeChambeau’s head.

Fellow American Brooks Koepka took it a step further when he was asked about it on a Golf Monthly podcast.

“I just don’t understand how it takes a minute and 20 seconds, a minute and 15 to hit a golf ball; it’s not that hard,” Koepka said on the podcast. “It’s always between two clubs; there’s a miss short, there’s a miss long. It really drives me nuts especially when it’s a long hitter because you know you’ve got two other guys or at least one guy that’s hitting before you so you can do all your calculations; you should have your numbers.

“Obviously if you’re the first guy you might take 10 extra seconds, but it doesn’t take that long to hit the ball, especially if it’s not blowing 30. If it’s blowing 30 I understand taking a minute and taking some extra time with some gusts, you know changing just slightly, I get that but if it’s a calm day there’s no excuse. Guys are already so slow it’s kind of embarrassing. I just don’t get why you enforce some things and don’t enforce others.”

Yes, I agree! Why is this rule not enforced?! There has been talk and threats in recent years about enforcing it, but those have been tantamount to a parent warning a child that if he acts out one more time at the restaurant, the family will have to go home. It never happens, and it never will.

There is another way, though, one the European Tour has proven actually works. In recent years the European Tour has experimented with the Shot Clock Masters, which penalizes players a stroke for taking over 40 seconds. So … how the actual tour is supposed to work (but often doesn’t). The shot clock has created sub-four hour rounds (!), and one participant, Soren Kjeldson, said this has actually helped him.

“You decide I’m not going to back off even if there’s a sound or a fly or something like that,” Kjeldson told Reuters last summer. “I was surprised how much that helped me because in a way you’re more committed, because (you are thinking) I’m going to hit now, no matter what.”

Short of penalizing players actual strokes in tournaments, nothing will ever really solve this. No governing body has shown the willingness to do so thus far. But hey, at least we’re making sure caddies aren’t spending more than .000003 seconds lining up players from behind 5-foot putts! 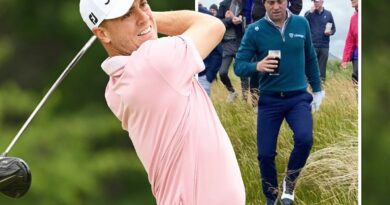