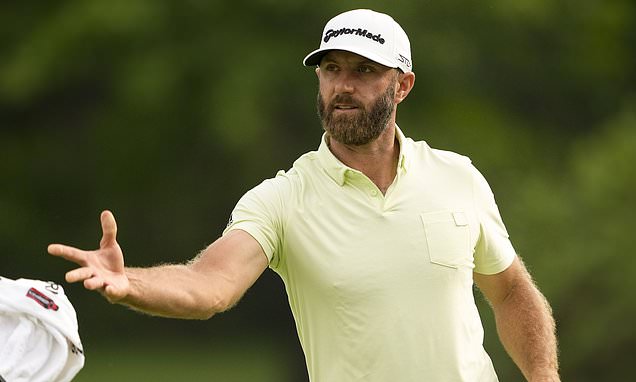 Dustin Johnson, one of golf’s richest stars, has made an abrupt U-turn to join the controversial mega-money Saudi Arabia-backed golf league.

Johnson, a two-time major champion now No 13 in the world, is the highest-ranked player and jewel in the crown of a field that currently includes 26 of the top 150 players in the world.

He has forged a lucrative and successful career on the PGA Tour, banking £59m and is third on the list of best paid golfers ever in terms of prize money behind Tiger Woods and Phil Mickelson.

But Johnson, who has not been granted permission to leave and may now face a ban, cited his family’s best interests in allying with the rebel group.

Both the PGA Tour and DP World Tour have recently declined all requests from members who had asked for releases to compete at Centurion for the first event, where a whopping £19.8m is up for grabs, including £3.1m for the winner.

The 37-year-old previously insisted he was ‘fully committed’ to the PGA Tour in February, so his change of heart will come as a surprise and disappointment to many fans.

Johnson’s manager David Winkle said: ‘Dustin has been contemplating the opportunity off-and-on for the past couple of years. Ultimately, he decided it was in his and his family’s best interest to pursue it. 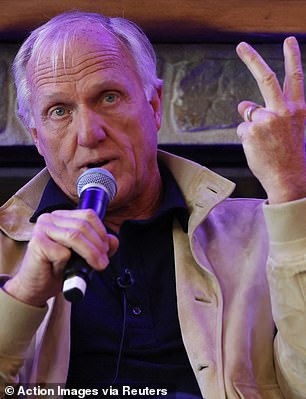 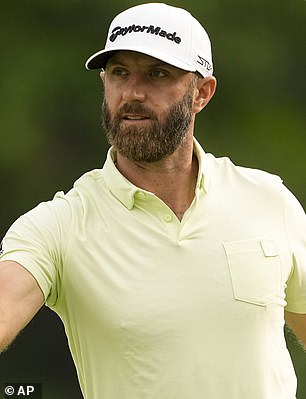 Dustin Johnson is arguably the biggest name to be joining the Saudi Arabia-backed golf league, fronted by CEO Greg Norman (left), who hailed the arrival of free agency in the sport 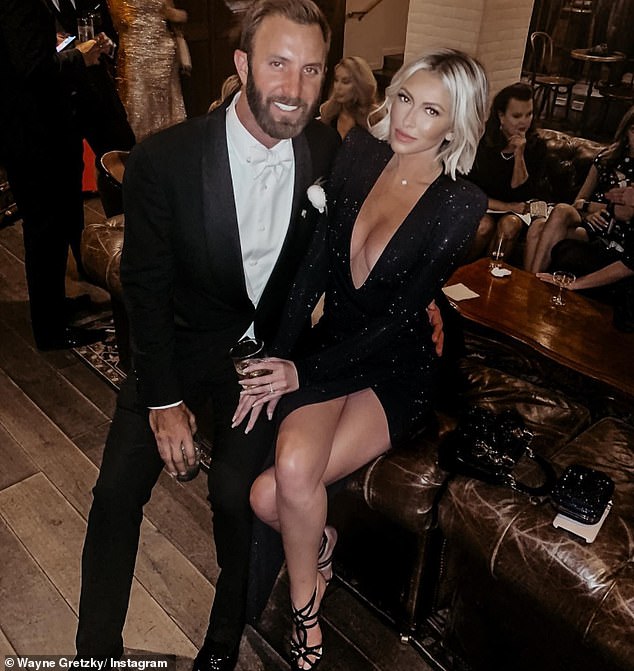 Johnson, pictured with his wife Paulina Gretzky, is the third best paid golfer ever 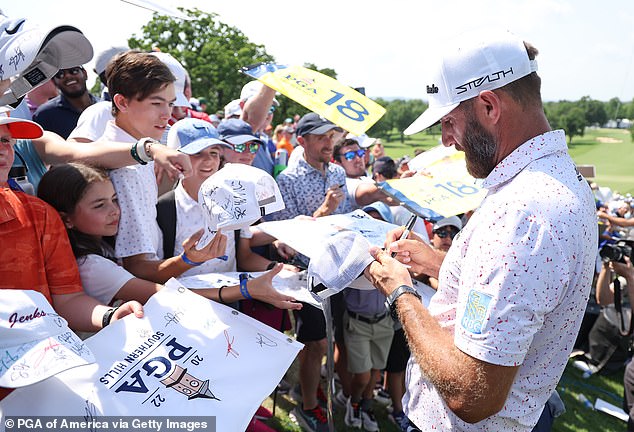 ‘Dustin has never had any issue with the PGA Tour and is grateful for all it has given him, but in the end, felt this was too compelling to pass up.’

He is joined by ex-major champion Sergio Garcia and they were announced among competitors for the opening LIV Golf Invitational Series event that did not include Phil Mickelson.

While six-time major champion Mickelson was not currently on the field list, he could still tee it up June 9-11 at the Centurion Club outside London as six spots in the 48-player event remain open.

Among the other notables included are former world number ones Lee Westwood and Martin Kaymer, as well as European Ryder Cup veteran Ian Poulter.

The final six players will be announced at a later date, LIV Golf said.

‘This is an opportunity to start a movement that will change the course of history by bringing new and open competition to the sport we all love.

‘The desire shown by the players to participate in LIV Golf demonstrates their emphatic belief in our model and confidence in what we’re building for the future.’ 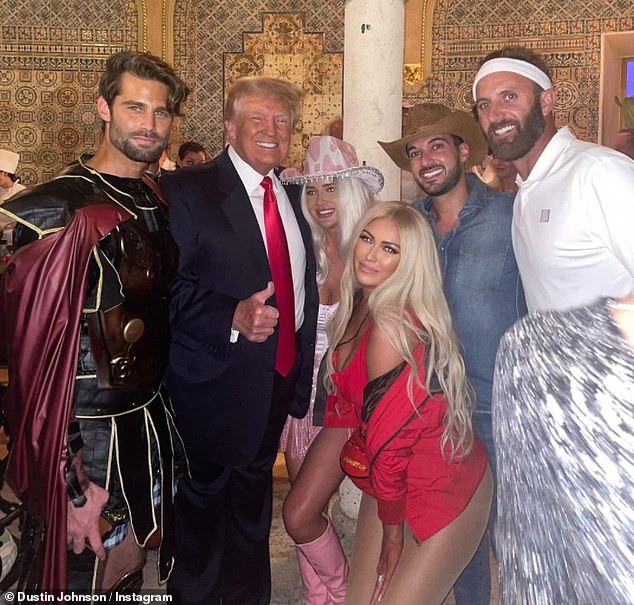 Johnson, pictured here among friends and former US president Donald Trump, is the highest ranked player and jewel in the crown of the breakaway competition

Mickelson has been linked to LIV Golf for months but has been on a self-imposed hiatus from the sport since February — even skipping his title defence at the PGA Championship — amid backlash over comments he made about the breakaway tour.

The 51-year-old Mickelson’s public image took a hit when the author of an unauthorised biography said the American golfer told him he was willing to look past Saudi Arabia’s human rights record to gain economic leverage over the PGA Tour.

It is unknown whether those competing in the lucrative breakaway circuit’s first event, which is being held opposite the PGA Tour’s Canadian Open — where the winner will get £1.25m from an £6.9m purse – will face punishment. 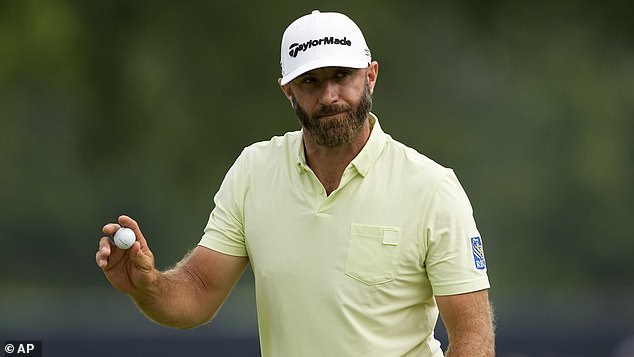 Johnson will join the likes of Lee Westwood, Martin Kaymer and Ian Poulter

Organisers of the Canadian Open said they were disappointed with Johnson, who was expected to play in Toronto and is an ambassador for RBC, the title sponsors of the tournament.

‘Together with our partners at RBC, we are disappointed to learn at this late stage that Dustin Johnson has made the decision to play the LIV Golf event,’ they said in a statement.

‘As a past RBC Canadian Open champion, Canadian golf fans were looking forward to DJ’s return this year.’

The PGA Tour and DP World Tour did not immediately respond to requests for comment. 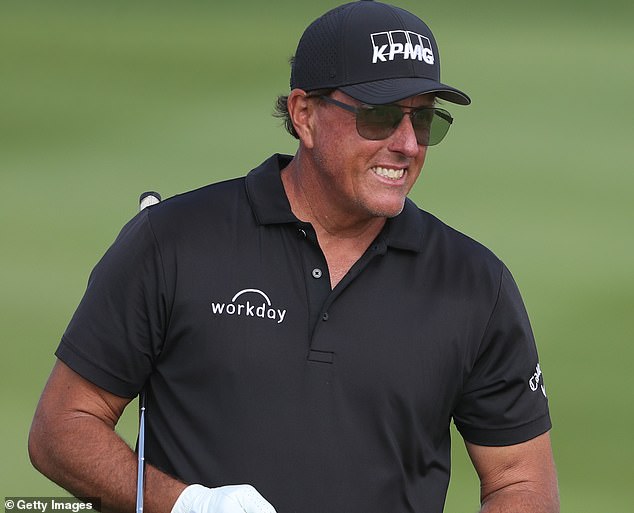 Mickelson, who has 45 PGA Tour wins, has not played on the US -based circuit since January and last competed in early February at an Asian Tour event in Saudi Arabia.

Johnson, who in February said he was ‘fully committed’ to the PGA Tour, ultimately decided the opportunity was too good to pass up, his agent David Winkle told Golf Channel.

‘Dustin’s been contemplating this for the past two years and decided it was in his and his family’s best interest to pursue it,’ Winkle said.

‘He’s never had any issue with the PGA Tour and is grateful for all it’s given him but in the end felt this was too compelling to pass up.’ 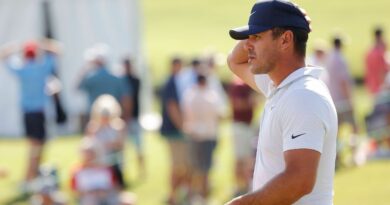 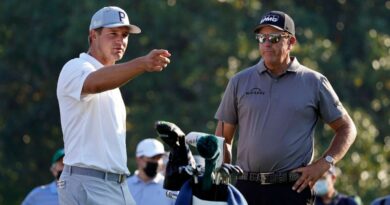