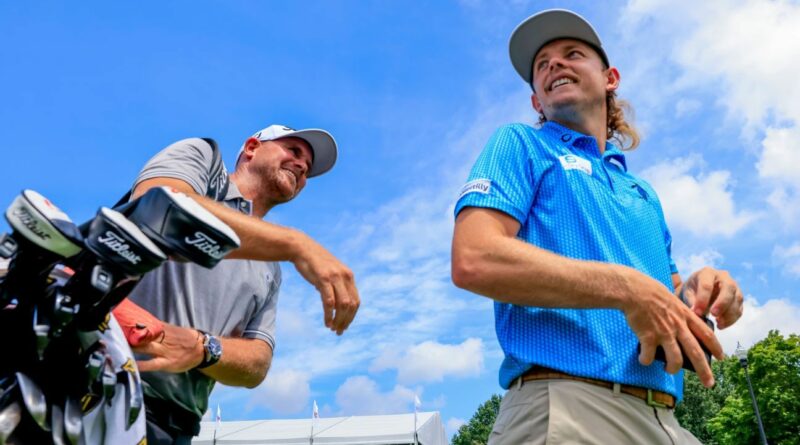 ATLANTA — The winner of this week’s season-ending Tour Championship, which starts Thursday at East Lake Golf Club, will take home an $18 million bonus.

The top 29 players in the FedEx Cup Playoffs points standings will compete for the top prize, after Will Zalatoris, who was third in the standings, had to withdraw on Tuesday because of a back injury.

But the week’s biggest news could come Wednesday when PGA Tour commissioner Jay Monahan addresses the media. Details have started to leak from a players-only meeting that was organized by Tiger Woods and Rory McIlroy at last week’s BMW Championship in Wilmington, Delaware.

The 22 players at the meeting were presented with a proposal that would include converting as many as 15 events to tournaments with smaller fields and bigger purses to entice top players to remain with the PGA Tour. More than two dozen PGA Tour members have left to join the rival LIV Golf series that is being financed by Saudi Arabia’s sovereign wealth fund, including past major champions Brooks Koepka, Bryson DeChambeau, Dustin Johnson and Patrick Reed.

The players have presented their proposal to Monahan. A player familiar with the discussions told ESPN that the plan is still in its infancy, and he wasn’t sure how quickly the tour could implement the changes if it moves forward.

A source told ESPN on Tuesday that Monahan is expected to reveal significant changes during his news conference at East Lake.

“Change for an organization that has such a long history as the PGA Tour does, I think it’s slow to change in general, and so if you’re making potentially big changes, they can’t happen necessarily overnight,” defending FedEx Cup champion Patrick Cantlay said on Tuesday.

Cantlay declined to talk about what was discussed in Delaware last week. He did say he would support changes that strengthened the PGA Tour’s position in its ongoing battle with LIV Golf.

“I think anything that’s better for viewers and trying to attract the most amount of viewers to bring them into the fold of golf and get them excited about golf, I think that would be a good thing,” Cantlay said.

Cantlay, who successfully defended his BMW Championship title last week, is trying to become the first player to win the FedEx Cup in back-to-back seasons. Not even Tiger Woods did it.

“I’m excited, coming back to a golf course that I like and obviously have some recent success on,” Cantlay said. “It’s nice to come into this tournament with a chance to win, being up near the top of the staggered start, although this year should be a different challenge than last year considering I’m 2 behind as opposed to 2 ahead.”

Cantlay, who is ranked third in the world, called this season a “grind.” He had 11 top-10 finishes in 19 tour starts, but didn’t pick up his first individual victory until last week at Wilmington Country Club in Delaware. He teamed up with good friend Xander Schauffele to win the Zurich Classic of New Orleans in late April.

“It’s the most golf I’ve probably ever played in a two-month stretch the last couple months,” Cantlay said. “I think it’s either six of eight or seven of nine [tournaments] for me, which is a lot of golf. I’m excited about the opportunity I have this week, starting this event only two shots back. But I’ll be happy when the season is over and I get a couple-week break before the Presidents Cup.”

Players not a fan of format

The Tour Championship is the only PGA Tour event that uses a strokes-based system, which is determined by a player’s position in the FedEx Cup points standings after the BMW Championship.

Points leader Scheffler will start at 10-under par on Thursday, and the three players behind him, Cantlay, Schauffele and Sam Burns, will start at 8 under, 6 under and 5 under, respectively. The next five players will start the tournament at 4 under, regressing by one stroke every five players until those ranked Nos. 26-30 are at even par.

Zalatoris, who picked up his first win at the FedEx St. Jude Championship, the first leg of the playoffs, was third in points and would have started at 7 under. Zalatoris pulled out of last week’s BMW Championship in the third round and has two herniated discs in his back.

Despite Cantlay’s success in the Tour Championship, he still doesn’t like the format, which is in its fourth season of existence.

“I’ve talked before about it,” Cantlay said. “I’m not a fan. I think there’s got to be a better system, although frankly I don’t know what that better system is.”

Schauffele, who has carded scores in the 60s in 18 of his 20 career rounds at East Lake, doesn’t particularly favor the format, either. He won the Tour Championship as a rookie in 2017 and was runner-up in 2019 and 2020.

“If we had it like it was before, Scottie would have won the FedExCup months ago,” Schauffele said. “I’m sure Scottie would like it in the old system, and it would be hard to argue that he doesn’t deserve it.

“But from a playoff standpoint and shaking it up and giving the viewers what they need, at the end of the day we play golf and we’re entertainers, so we need to create an entertaining space,” Schauffele said. “I think having some sort of alternative outcome where someone else has a chance to win is what everyone would want. Like I said, I don’t know what that looks like, but I’m sure it could be improved.”

So, what’s the best way to change it? U.S. Open champion Matt Fitzpatrick suggested that a match-play format in the three playoff events might be a better option. That change might give everyone in the field a chance to win.

“Golf is just so different to the other sports,” Fitzpatrick said. “That’s why I think looking at match play would probably be more of an answer because you’ve got a team that makes the playoffs in last place or whatever and you don’t think they’re going to go anywhere, and then they end up going all the way. And then you could have a guy, say in 90th [place], get all the way to the final.”

Pass out the name tags

“Yeah, I was speaking to someone last week about the average age of players now has dropped dramatically and guys are winning younger,” Fitzpatrick said. “I think that kind of says it all with like nine first-timers. Obviously, everyone is much younger of those first-timers. I think golf is obviously in a decent place on that front.”

Zalatoris would have been the 10th first-timer. He’ll finish 30th in the FedEx Cup standings and will receive a $500,000 bonus. Schauffele didn’t like the way that worked out for Zalatoris, who finished tied for sixth or better in three of the four majors. He lost to Justin Thomas in a playoff at the PGA Championship and tied for second at the U.S. Open.

“You know, I think unfortunately I saw on the news of Will not being able to play this week, and after a season that he had to sort of just to go to last place, I think it’s a bit harsh,” Schauffele said. “I think it could be sorted out a little bit better.”

East Lake, which was the home of golf legend Bobby Jones, has hosted the Tour Championship since 1998. It has thick and long Bermuda rough, which is extra juicy this week because of the recent wet weather in Atlanta. Players might get a reprieve from the typically hot August weather in Georgia; forecasts call for temperatures from 80 to 86 degrees. There’s a decent chance for thunderstorms on Thursday and Friday.

“I’d say obviously this course is one of the best-conditioned golf courses we come to all year,” Cantlay said. “Seems like every year it’s in perfect shape. Seems like it’s a lot wetter this year. The fairways are long, and I don’t think they’ve been cut just due to the softness. But if the weather holds off and doesn’t rain too much, I’m sure it’ll firm up every day.”

Win exclusive access inside the ropes with Rory McIlroy

Controversial selection that could bite Tiger