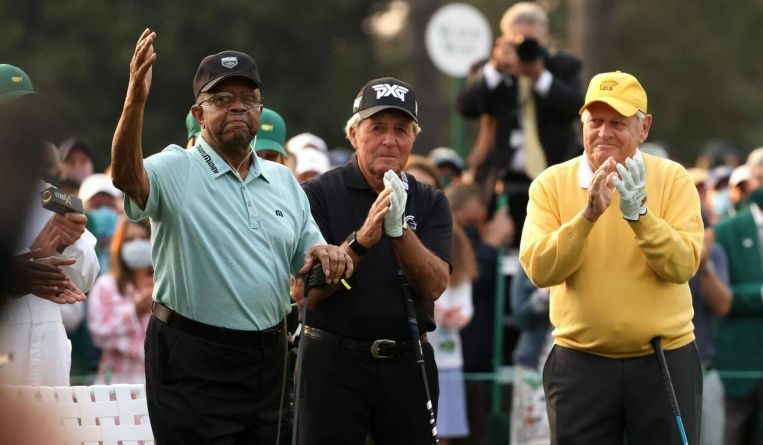 AUGUSTA (AFP) – Barrier-breaker Lee Elder, the first Black golfer in the Masters, said Thursday’s ceremonial starter tribute at Augusta National was a moment he will treasure the rest of his life.

The 86-year-old American joined Jack Nicklaus and Gary Player on the first tee as an honorary starter at the 85th Masters, greeted with a round of applause in recognition of his place in tournament history.

“It was one of the most emotional experiences I’ve ever been involved in,” he said. “It’s something I’ll cherish the rest of my life.”

Augusta National chairman Fred Ridley called Elder an inspirational trailblazer whose strength and character in the face of threats motivated men and women of colour to follow their golf dreams.

Elder, who was helped to his feet to enjoy the moment, left the ceremonial tee shots to Nicklaus and Player, instead waving as he held his driver and soaking in the ovation.

“In 1975, the strongest memory as I recall was how nervous I was going to the first tee,” Elder said.

“I had a wonderful round that day. Every tee and every green I walked on I got tremendous ovations. Having something like that helped settle you down. I was able to stick with business.”

Nicklaus said he was shocked there had not been a Black player in the Masters before Elder.

“It astonished me a Black player hadn’t played,” he said. “Fellows had played well enough.

“I felt it was long overdue when he finally got invited. Lee has represented himself well. Long overdue, but he got here.”

Elder recalled working his way as a caddie to save enough money to play US PGA events.

“That was the only way we as Black players had a chance to go,” he recalled. “For a Black player at that time, it was a hard time.

“It’s a hard time even today, but it was harder to get a good sponsor to put up the money it was going to take to play on the tour.”

They, like Elder, faced threats of violence to play their sports.

“They were both swell people,” Elder said. “We talked about several things, about our sports, the involvement and how we could help other young blacks coming up behind us.

“I hope the things I’ve done will inspire young Black men coming up behind.”

Elder was an inspiration for, among others, Tiger Woods, the 15-time Major winner and five-time Masters champion recovering at home in Florida from severe leg injuries suffered in a February car crash.

“Having Lee there was the right thing to do, a nice thing to do,” Nicklaus said. “I enjoyed sharing the first tee with Lee and Gary.”

South African Player recalled being called a “traitor” in his homeland for bringing Elder to play there.

“You can imagine how encouraging it was for a young black boy to see this man playing, a champion,” Player said.

“When you do something for the human being and for freedom, it is a very historic moment for me.”

Player, who 60 years ago became the first Masters champion from outside the United States, praised the progress golf has made in diversity.

“For me to see us go over the brink from the bad times to the good times and the positive times, we’ve made great strides,” he said.

“We’ve got to look at it in a positive manner. We’ve all made great progress and we have to continue in this vein.” 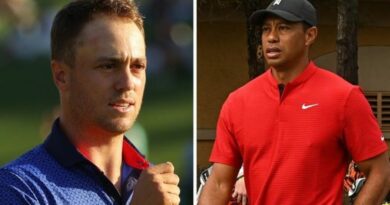