(REUTERS) – Bryson DeChambeau charged to a share of the third-round lead with Peter Uihlein on a day when Lucas Glover shot 61 at the Shriners Hospitals for Children Open in Las Vegas on Saturday (Nov 3).

World No. 6 DeChambeau, the highest-ranked golfer in the field, birdied four of his final six holes, including the last, to shoot six-under 65 and join fellow American Uihlein (68) atop the TPC Summerlin leaderboard at 16-under 197.

They were a stroke in front of 2009 US Open champion Glover, who eagled his final hole to go 10-under after starting the day with a bogey.

DeChambeau, hoping to make amends for a poor showing on the losing US Ryder Cup team, was outstanding with his ball striking as he collected six birdies.

“It was nice to be able to take two weeks – or three, four weeks off. I don’t know how many weeks I was off. It’s nice to not know essentially coming into an event and still be able to perform,” he told PGA Tour Radio.

“The putting is still a little rusty.”

Uihlein, the sole leader on the first two days of the tournament, missed a birdie putt that would have put him in front alone going into Sunday’s final round.

A wayward tee shot that resulted in a bogey at the par-four 10th hole had temporarily cost him the lead but the American struck for birdies on the 13th and 15th holes for a two-stroke advantage before DeChambeau charged home.

Glover’s 61 equalled the lowest round of his PGA Tour career.

Playing the back nine first, he overcame an opening bogey with three birdies and an eagle to go four under through nine holes, then rolled in four more birdies and the closing eagle.

“I started out with a bogey on 10,” he said. “Hit a good putt, just misread a four-foot slider. Made everything else, that’s for sure. Couple eagles on the par-fives. Holed it like a bucket. One of those days.”

Chilean teenager Joaquin Niemann went one better with a hole in one on the par-three 17th hole.

The 19-year-old finished birdie, birdie, ace, birdie but two bogeys and a double-bogey earlier on the back nine proved costly in a round of 67 that left him at 204, seven shots off the lead.

Three-time Major winner and former world No. 1 Jordan Spieth also had his troubles, finishing at even-par 71 with two birdies and two bogeys for a 205 total.

Genesis Open LIVE: Rory McIlroy on the charge as he chases down leaders 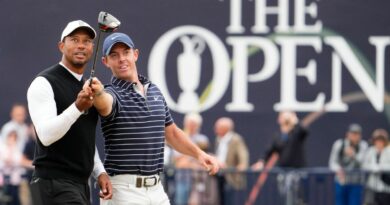