Home » Golf » 'Golf doesn't make me any different, and I quite like that'

If there’s something that unites Rory McIlroy and Leona Maguire as they return to action this week, it’s an implacable drive to leave past victories behind and strive for more.

They have been propelled to considerable success on the strength of their not inconsiderable talents, but while McIlroy’s self-confident swagger has always contrasted with the Cavan woman’s low-key determination, so prominent have they become over the past ten years that it’s easy to take their brilliance for granted.

McIlroy (30) returns to the arena in this week’s Farmers Insurance Open at Torrey Pines with his sights set on ending his five-year Major drought and reclaiming the world No 1 throne from Brooks Koepka.

He’s buoyed by his brilliant end to 2019, when he overcame Koepka to win the Tour Championship and the FedEx Cup. But when you’re richer than Croesus and younger men have stolen your spotlight, it takes a special X-factor to wrest it back.

Like Maguire, whose work ethic remains as sharp as it was when she first dreamed of becoming an LPGA Tour player, McIlroy has retained the drive of the child who had to be dragged shivering from the practice ground on long winter evenings. His biggest nightmare is not another Koepka Major win or Masters failure, but failing to live up to his potential.

“In my 20s, when I came into financial success, comfort, resetting goals, it goes back to when you are a kid,” he said of what motivates him, adding that he is impressed by Tiger Woods’ “relentless excellence”.

“Your dreams are of hoisting trophies and becoming the best player in the world. The money part of it never came into the equation. What I have learned is that no amount of money is going to change my drive to become the best in the world. That’s not the reason I got into the game.

“The rewards are nice, and you can set your family up and generations in the future, and I struggled with that for about a year. In ’13 [when he signed his first $100 million deal with Nike], I was a little lost. What am I playing for?

“What are my goals? You realise it isn’t everything. You can have the houses, have the cars. But it’s not about that. It’s about fulfilling the potential you have.”

As for the pride of Ballyconnell, Maguire (24) makes her first appearance as an LPGA Tour player in the inaugural Gainbridge LPGA at Boca Rio with her customary humility, a trait coach Shane O’Grady puts near the top of her list of virtues.

“I suppose I have always been quite level-headed,” she said ahead of an eight-week road trip that will take her from Florida to Australia and then on to Asia for the first time for the Blue Bay LPGA on Hainan Island in China. “We were lucky that mam and dad always kept us quite grounded. That’s the nice part about going home for Christmas. I am still just a normal girl from Cavan, and everybody knows everybody anyway. I am not any different because of golf, and I quite like that. .

“You don’t want to get too far ahead of yourself or think about what could happen. When it does happen, it is a feeling you enjoy, but there is always something else to strive for. Some people are very confident, and some go about their business a little more quietly. I am more the latter.”

She enjoyed her six-week winter break amongst the drumlins of Cavan, quietly working on her game with her coach while also taking time out to attend some season-ending awards ceremonies to compare notes with the likes of Shane Lowry.

After winning twice on the Symetra Tour in the first half of last year, she now has an LPGA Tour card that gets her into every event bar the Majors and gives her the chance to meet many of the players she’s already beaten in her days as an amateur.

“There are some goals written down, but it will be a learning year in many ways,” she said, revealing that she’s added Scottish caddie Gary Marshall to an entourage that will occasionally feature her twin sister Lisa, who now works for her management agency Modest Golf. “I am a rookie in a way, but I don’t feel like a rookie. There will be a lot of familiar faces.”

Her career goal is to win LPGA Tour events and Majors, but she’s never felt burdened by others’ expectations.

“People ask me about being world amateur No 1 and how many weeks I had that spot, but I never kept track of that,” she said. “I was more focused on winning college events and doing well for the team.

“You can never get complacent or rest on your laurels. This year will be no different. There are a million and one ways to do it but I have always done it my way.” 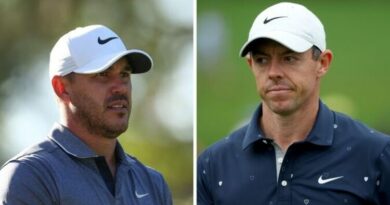 Rory McIlroy’s chances once slyly dismissed by Brooks Koepka: ‘Don’t see it as a rivalry’