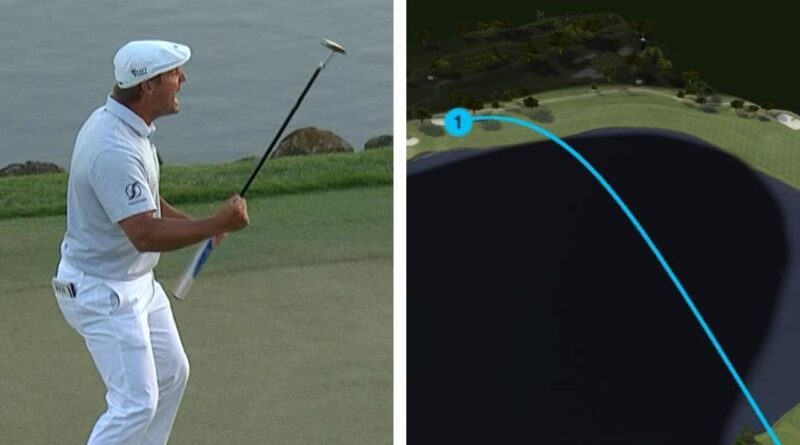 To do it once is gutsy.

To pull it off when tied for the lead in the fourth round of a major PGA event takes balls of steel.

Only on Sunday Bryson DeChambeau thrilled fans at the Arnold Palmer Invitational by smacking a 370-yard drive over the lake at Bay Hill’s sixth hole, before going on to win the event by one shot over Lee Westwood.

In a tense, low-scoring final day in windy conditions, DeChambeau held his nerve, striping another clutch bomb off the tee on 18 before draining a nervy five-footer to par for the win.

Golf: Bryson DeChambeau has launched another monster 377 yard drive over the water to help his chance of winning the Arnold Palmer Invitational, while Rory McIlroy tried with …

Golf: Bryson DeChambeau has launched another monster 377 yard drive over the water to help his chance of winning the Arnold Palmer Invitational, while Rory McIlroy tried with far less success.

The round was once again highlighted by his gutsy tee shot on the sixth, which in January he declared he would attack with an unprecedented aggressive line over the lake.

Unfavourable conditions meant he had to wait until Sunday (AEDT) to unleash.

That was not stopping golf’s most captivating figure though from going for it again on the final day with everything on the line.

DeChambeau has always been fearless – it is what makes him must-watch TV – and despite having a share of the lead, he passed on the conservative route and instead took the opportunity to draw on his long game once more.

DeChambeau did not let the fans down, hitting a 377-yard drive which landed within 88 yards of the pin.

The next closest second shot all day was 231 yards away.

Sports are the friggin best. Check out the gallery on 6 as Bryson DeChambeau lets it rip. I have missed this! #golf#APINVpic.twitter.com/TEEBxbu5bW

Golf: It isn’t often you get celebrations like these off the tee, but American Bryson De Chambeau was understandably chuffed by his huge drive at the sixth in the Arnold Palme…

Golf: It isn’t often you get celebrations like these off the tee, but American Bryson De Chambeau was understandably chuffed by his huge drive at the sixth in the Arnold Palmer Invitational.

The American then made 12-consecutive pars, forcing Westwood to make a play in the closing stages of the tournament.

Westwood snaked in a lengthy par putt to put the pressure on, but DeChambeau made no mistake with his nervy five-footer for the win.

After the round, DeChambeau was emotional speaking about his win at the event once hosted by golf legend Arnold Palmer.

“It’s been quite a battle this entire time. I don’t even know what to say. To win at Mr Palmer’s event — it’s going to make me cry,” he said. “It means the world to me.”

DeChambeau then revealed that he felt motivated by a text exchange with Tiger Woods the morning before the final day.

“That’s what I surely did out there today.”

Bryson DeChambeau is an absolute monster off the tee. 💪 💪 💪 It’s unreal how far he crushes the ball. Game changer. pic.twitter.com/G6Fok38zrh

DeChambeau just knocked his tee shot over the green on a par 5. Unreal!

Love him or hate him. Fair play to DeChambeau for having the balls to play that shot with so much to lose!

Bryson DeChambeau is an animal. Balls of steel.

But the man of the hour was FedEx cup leader DeChambeau, who really silenced any doubters or sceptics of his unconventional approach with a six-shot victory at the US Open last year and at the time spoke about his fearless style.

“I hope that inspires people to say, hey, look, maybe there is a different way to do it,” said DeChambeau.

“Not everybody has to do it my way. I’m not saying that. I’m just saying in general that there are different ways to do things.”

While DeChambeau’s risk paid off, it was not the same story for Rory McIlroy, who just could not get it right.

The four-time major winner had 66 in Round 1 to share the lead with Corey Conners but ultimately finished in a tie for 10th after he hit two tee shots into the water on No. 6.

He made a remarkable recovery, with an up and down from 243 yard to claim a double bogey, although he still finished eight shots behind DeChambeau.

Rory won the Players … might that mean the Masters is next?

PGA Tour aims to have fans return in early ’21