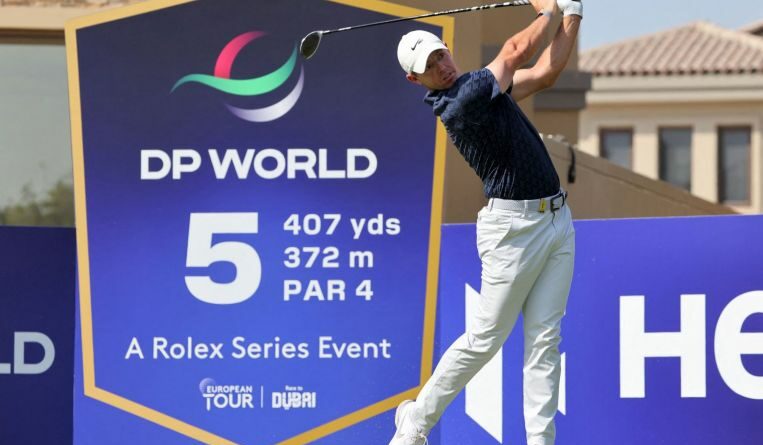 Four-time major winner McIlroy, playing the 20-man invitational event for the first time since 2013, made clutch pars at 16 and 18 to keep his place among the leaders at the Albany resort in the Bahamas.

Americans Webb Simpson, Brooks Koepka and Justin Thomas shared fourth on 67, with Thomas stumbling out of the lead due to a closing double bogey.

The event, featuring 17 of the world’s top 25 golfers, was not contested last year due to the Covid-19 pandemic. Sweden’s Henrik Stenson, ranked 179th, defends the crown he won in 2019.

World number eight McIlroy birdied three of the first five holes but stumbled with a double bogey at the ninth.

The 32-year-old Northern Ireland star began the back nine with back-to-back birdies and added an eagle at the par-4 14th. McIlroy followed with a birdie at the par-5 15th and parred in from there.

“I was really proud of myself after that double bogey. I played the back nine 5-under. That was a good response to that little setback,” McIlroy said.

“I played the par-5s at par. That’s not good enough to win out here. I can’t rely upon doing what I did today over the next three days.”

McIlroy, who has bounced back after a disappointing performance in Europe’s Ryder Cup loss to the United States in September, seeks his third victory of the year after PGA titles at Quail Hollow in May and the CJ Cup in suburban Las Vegas in October.

“I set my standards a little higher than that, but I think I turned a corner after the Ryder Cup,” McIlroy said.

“My game today has been a continuation of how I’ve felt. I left a few out there today. Overall. the game is feeling a lot better.”

Berger, playing his first event in 88 days since the 2020-21 season-ending Tour Championship in Atlanta in September, opened with four birdies and added another at the seventh.

“It’s a great field and when you show up here you want to win,” Berger said. “A little rusty, haven’t played in a while, but I did pretty good.”

World number 12 Ancer, who won his first PGA title in August at Memphis, made birdies at the third and seventh before closing the front nine with a bogey, then followed with birdies on five of the next seven holes.

“Very solid round. Happy with all of my bag,” Ancer said.

“The highlight was definitely my putter. I rolled it nicely.”

Thomas birdied the first three holes and added back-to-back birdies at the par-5 sixth and par-4 seventh. After a bogey at the par-3 12th, the world number six birdied three in a row starting at the 14th to seize the lead at 7-under.

But Thomas found a bush off the 18th tee and missed a six-foot curling bogey putt to double bogey the last and fall back.

Four-time major winner Koepka birdied the par-4 fourth, par-5 sixth and par-4 seventh, then began a run of three birdies in a row at the par-5 ninth. But he fell out of a share of the lead with a bogey at 13 and parred in from there.

PGA Championship shots of the decade: Aces, hole-outs and more!