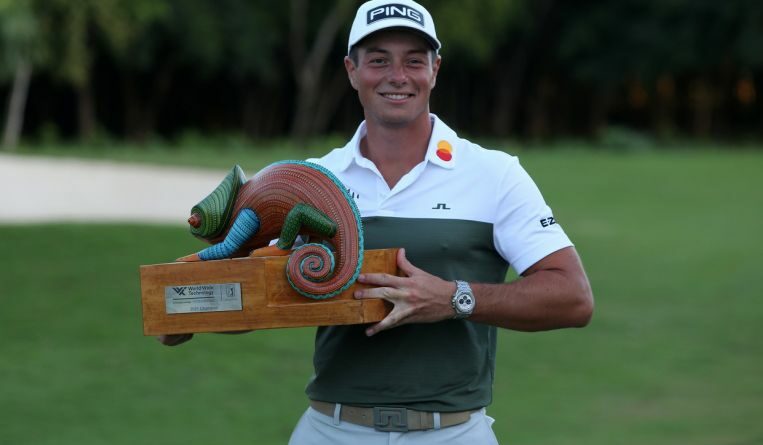 (REUTERS) – Norway’s Viktor Hovland shot a four-under 67 in the final round of the World Wide Technology Championship at Mayakoba on Sunday (Nov 7) and cruised to a four-shot victory at Riviera Maya, Mexico.

The 24-year-old defending champion, who took over the lead with a nine-under 62 in Saturday’s third round, had three birdies on the front nine on Sunday and was never threatened despite two bogeys over his final seven holes. He finished at 23-under 261.

“Yeah, I felt like my game was in a good spot going into this week, and I knew this course fit me really well, so I was – I was coming in with some high expectations, but obviously for it to end like this and win by four shots, it’s been a cool week,” Hovland said.

“Couldn’t ask for it to go any different.”

Mexico’s Carlos Ortiz (66) made a late charge but just missed out on winning on home soil, finishing at 19 under, while former world No. 1 Justin Thomas (69) was alone in third place at 18 under. Scottie Scheffler (66) ended fourth at 17 under, while Matthew Wolff (65) and Chile’s Joaquin Niemann (66) were tied for fifth at 16 under.

It was Hovland’s second straight victory in the event, and his third career win since joining the PGA Tour in 2019. He also won the Puerto Rico Open in February 2020.

Hovland ended up with six birdies over his final 18 holes after he delivered nine birdies in Saturday’s dominating round. The victory came while using a loaned driver from James Hahn, a necessity after Danny Lee borrowed Hovland’s club on the driving range earlier in the week and snapped it.

While the slightly shorter driver cost Hovland distance – up to 10 yards per drive – he made up for the loss in length with better accuracy, opening up as much as a six-shot lead on Sunday while on the back nine.

“I’ve had my best year off the tee strokes gained with the one that I had before it broke,” Hovland said. “So I don’t really see a point in changing that driver, but I could see myself using maybe this set-up at certain courses, for sure.

“(Hahn) was really nice to lend me his back-up, so I definitely owe him one,” Hovland cracked. “We can negotiate something going forward.”

Ortiz was even par through 11 holes before making his late push. He had four consecutive birdies from holes 12 to 15, then added another at the par-four 17th. It wasn’t enough, but it did give him a runner-up finish.

“Having them out here, all my friends, I just found a way to get something going,” the 30-year-old said. “And it’s funny how golf works, but once you hit that first shot that you see and how you want it, just clicks and I just find that confidence that I needed to finish strong.”

Thomas followed his 64 on Saturday with a 69 on Sunday and a top-three finish. He had two birdies and a bogey on the front nine, and did the same on the back, with birdies at Nos. 13 and 15 before closing with three pars.

“I hit some good putts that I felt like could have gone in that just didn’t,” the 2017 PGA Championship winner said. “Yeah, I just didn’t drive it well, didn’t get off to a good enough start to really put any pressure on Viktor.”

Wolff finished an up-and-down event with a 65. He shot a 10-under 61 to take the first-round lead but fired a three-over 74 on Saturday.