The sweet swinging Anne van Dam loves the Bonville layout – it reminds her of the course where she learnt her golf – so when the coronavirus forced the Asian leg of the LPGA tour to be called off, she was always returning to Coffs Harbour.

The dutch 24-year-old, who won twice on the European tour last year, will start one of the favourites for the Bonville Classic, which boasts its best field, this week.

She only entered the Bonville Classic with a day to spare, as did a number of other LPGA players, and she is looking forward to the challenge of one of Australia’s best layouts. 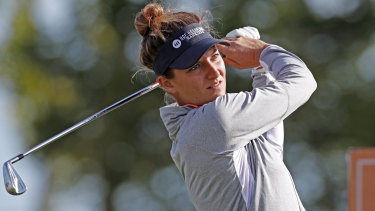 “I got lucky in a way because we had the three tournaments in Asia that got cancelled due to the coronavirus,” van Dam said. “I knew they were going to cancel them, so a day before the sign up closed here [I entered] because I knew it is a good course.

“We have a very big gap in our schedule for a few weeks now. It was a no-brainer to come back here for me. I have always liked tree-lined courses, I grew up on a tree-lined course, it suits my eye.

“It’s quite a strategic style of golf course here, where you have to hit on the right side of the hole to leave yourself easier putts.”

Van Dam is already a winner in Australia, having taken out the Canberra Classic last year. She finished in the top 20 at Bonville last year and is coming off a 41st-place finish at two-under par around Royal Adelaide in the Australian Open last week.

The Bonville Classic favourite is Ayean Cho, who sits in the world's top 30 and led into the final round of Australian Open before finishing sixth.

Van Dam has become an internet sensation with golf fans, her swing described as perfect by many good judges. She always attracts attention and will again take on the world’s best in her second season on the LPGA in 2020.

“It is the biggest league you can play in,” van Dam said. "It is great to play in the US every week and test yourself against the best players in the world.

“I got some things I have to work on, when I compare myself to the best players in the world. I'm hoping to get a win on the LPGA and contend in the majors.

“I will probably play 25 tournaments focusing on the majors and the Olympics this year.”

Van Dam's swing is considered by many the best in golf at the moment and there have been comparisons to LPGA legend Mickey Wright, who died this week aged 85. Wright won 82 LPGA tournaments, including 13  majors during the 1960s with Ben Hogan saying she “had the finest golf swing I ever saw.”

Van Dam is flattered by comparisons.

"If I can be half as successful as she was, I will have a pretty good career," she said.

Tiger Woods children: How many kids does Masters winner have, what are their names, age?

Jockey Club donate 10,000 tickets to NHS in 2021
We and our partners use cookies on this site to improve our service, perform analytics, personalize advertising, measure advertising performance, and remember website preferences.Ok