The Ryder Cup had the Miracle at Medinah, but how about the Presidents Cup’s own Miracle in Melbourne?

It wasn’t quite the mass-scale final-day heroics which helped Europe snatch victory over the United States in 2012, but this was an unlikely comeback as you will see an individual match. 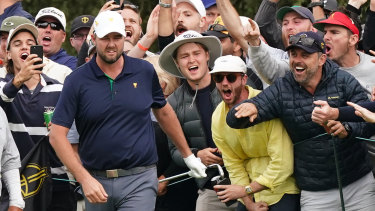 “We did it for the crowd. They were awesome out there. That's something I'll remember forever, just people basically screaming and high-fiving and we were still one-down. I felt like we were about four-up. It felt like a lot more than a half point.

“That's probably as good as I've felt on a golf course – and I only halved the match. We've all won up here; we've won tournaments, but we don't get chances to play with a teammate very often.”

Who knows what it will mean in the wash-up, but Els certainly wasn’t underplaying its impact in giving a huge jolt to the Presidents Cup underdogs.

Byeong-Hun An burned the hole on a birdie putt on the last to square the final foursomes match of the day as Els’ side scrambled a solitary point in the afternoon, which felt like so much more. They lead 10-8 going into the final day singles matches.

“That gets momentum,” Els said of the Leishman-Ancer heroics. “We had a lead. It looked like it was going to be wiped away, and the guys absolutely played with their guts and I could not be more proud and more happy for those guys in that cabin tonight. They are as excited as you could ever see a team be, losing a session 3-1 I can tell you. It was some unbelievable golf, and my hat's off to those guys.”

Ancer had to drain a long putt just to keep the match alive on the 15th hole and then the hosts ran the table in the final three holes, capped when Thomas sprayed his drive into the bushes on the last.

“I think speechless,” Thomas said. “It's unacceptable for us to get a half a point. They made a couple long putts there on 15 and 16 to keep it going. We had our chances and flat honest, just didn't execute. I'm just disappointed in myself for burning that, I felt like, for us on 18 [with a stray drive].”

Thomas remains unbeaten this week and will take on Australian Cameron Smith in his singles match with Ancer to open the session against US playing-captain Tiger Woods.

The key numbers for 2018 in the golfing world