Home » Golf » In the swing: Woods may play four matches at Presidents Cup

Australian fans are going to see plenty of Tiger Woods with the American team captain hinting he may play more than the minimum two matches at next week's Presidents Cup in Melbourne.

Sources inside the 15-time major winner's camp have suggested he will play up to four matches at Royal Melbourne. 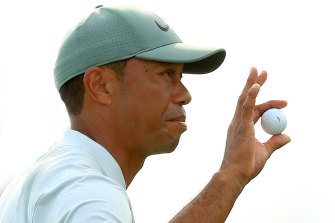 Tiger Woods will lead the US team at the Presidents Cup in Melbourne.Credit:Getty Images

The soon-to-be 44-year-old is currently in contention at his charity's event in the Bahamas, the Hero World Challenge.

Woods and the American team will leave the Bahamas on Saturday night and arrive in Australia on Monday morning.

The tournament began a day earlier than usual to accommodate golfers travelling to Australia and the field included all but one member of the 12-player US team that will compete at Royal Melbourne.

When he was asked by reporters how many matches he would play, Woods joked: "Yeah, I'm playing a minimum of two. Does that help you?

"We have game plans for next week. We've got guys that haven't played. DJ [Dustin Johnson] is coming off an injury, a surgery. We're going to take it day by day, see how guys feel. We're going to communicate with one another and work through it."

Woods equalled the US PGA Tour's winning record with his 82nd title in Japan and said the arthroscopic surgery he underwent on his knee in August had improved his mobility.

"I can drive the ball a little bit better because I can rotate," Woods said.

"I can putt the ball better because I can get down and read putts again."

Woods began the second round of the Hero six shots behind overnight leaders Patrick Reed and Gary Woodland.

His six-under-par 66 matched Reed and Jon Rahm for the day's low score and left him in a share of fifth place with Justin Thomas (69) and Rickie Fowler (69).

He is six shots behind Reed, who holds the outright lead after the second round at the Albany Golf Club.

Patrick Reed is ready for fan backlash during the Players Championship