Jordan Spieth praised US Olympic icon Michael Phelps for helping the mental side of his golf game in recent years. Spieth – who is now a good friend of the most successful Olympian of all time – played alongside Phelps at this year’s BMW Championship pro-am that took place on Wednesday ahead of this week’s second FedEx Cup play-off event at Caves Valley.

“He’s getting very involved in mental health, and it’s been something that I’ve actually worked on a lot in the last few years, and that’s been a space that probably should be talked about more within athletes, their experiences across different sports, too. I’ve been really fortunate that he’s lent an ear and also bounced ideas off me.”

Spieth announced himself as one of golf’s great stars early on in his career, after claiming two major titles in the Masters and the US Open, as well as the FedEx Cup in just his second full season on the PGA Tour back in 2015.

After that fast start, though, the three-time major winner hit his first real rut throughout the 2018, 2019 and 2020 campaigns, struggling both technically with his golf game, as well as with the all-important mental side too.

Fortunately for the 2015 Masters champion 2021 has seen him return back to his frightening best.

Having started the year as low as 92nd in the world, A fine campaign on Tour saw him pick up his first win in four years at the Valero Texas Open in April, as well as record two second-place finishes including one at the Open Championship last month, moving him back into the world’s top 15 for the first time in three years.

And Spieth revealed the support of friend Phelps has been invaluable to his resurgence, and he feels privileged to have access to one of the greatest sportsmen of all time.

The 28-year-old added: “Without getting into details that are competitive advantages, I think he’s been a fantastic kind of friend, and we’ve been able to spend time down in Mexico separate from the brand, too, and get to know his family.

“Again, to have a golf lover be the most decorated Olympian of all time, it’s really good for our sport, and it’s even better that I’m able to access it, as well.”

As well as Spieth singing the praises of Phelps, the legendary swimmer also returned the favour, highlighting the three-time major’s winner’s determination to battle his way back to the top of the game.

The 23-time Olympic gold medalist commented: “His determination is something that’s incredible to watch. To be able to struggle like that for multiple years on the golf course, it’s hard. I know what that is and I am not even a pro.

Spieth is not the only golfer that has benefited from the wise words of Phelps, as world number one Jon Rahm also revealed this week that the US swimmer played a huge role in helping him reach the top of the world rankings.

Rahm also complimented the Olympic great saying: “He’s gone through a lot, and as an athlete he’s somebody to look up to very easily.

“When you’re the greatest Olympian of all time, you definitely have a couple tricks up your sleeve, a couple good moments of wisdom in that sense. I’m not going to disclose too much on what I’ve asked him golf-wise, but he has helped me a lot.” 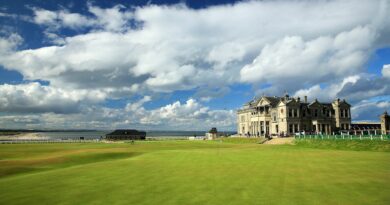 From St. Andrews on down: Ranking every single Open venue