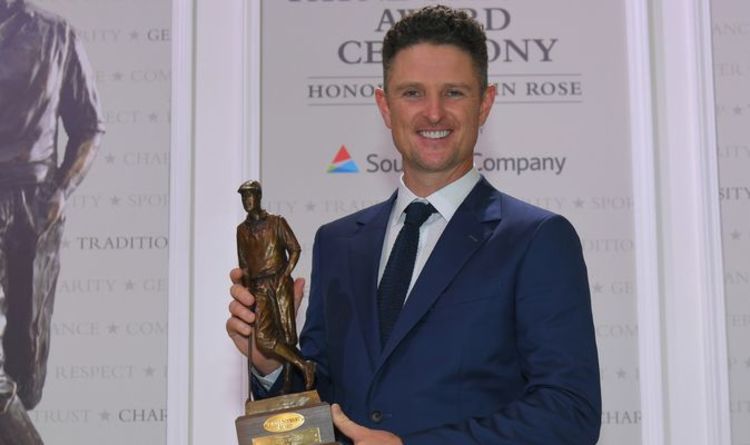 Justin Rose revealed he first came across former golf legend Payne Stewart as a 12-year-old spectator at the 1993 Open Championship, after the Englishman accepted the PGA Tour charity award named after the American great.

Following the announcement three weeks ago, the 2013 US Open champion was finally able to get his hands on his prize at yesterday evening’s award ceremony, which took place at East Lake Golf Course, the host of this week’s Tour Championship.

After taking to the stage to accept the award from PGA Tour commissioner Jay Monohan, Rose gave an exemplary acceptance speech, thanking the Tour organisers, sponsors, his family and the wife and children of Stewart, who were in attendance at the ceremony.

As well as this, Rose also told of a story from his early years as a golfer and spoke of how his first encounter with Stewart came as a 12-year-old spectator at the 1993 Open Championship.

During his speech he said: “The story is of a young child who was at the 1993 Open Championship at Royal St. George’s, and he was there as part of a group of enthusiastic young spectators all pressed against the iron railings that skirt the surroundings of a tee box.

JUST IN: PGA Tour won’t copy tennis and punish Bryson DeChambeau for not speaking to press

“As the pros approached the tee, one of them locked eyes with this child, and in a moment of connection that made the boy feel so special, he gestured to him and singled out the boy from the crowd. He then casually tossed a ball over to the boy.

“That child wide eyed and full of inspiration went straight back home to his room to putt with that special ball, the gleaming titleist that had been in action just hours earlier that day connected this child to the feeling of being a pro… Of course the legendary idol I’m referring to is Payne Stewart, and the wide eyed young boy was me Justin Rose aged 12.”

Rose’s remarkable anecdote seemed an extra special one due to the occasion after collecting the award recognising his greatness nearly 30 years later.

The Englishman has enjoyed a remarkable career as a professional golfer, claiming 11 European Tour wins, 10 on the PGA Tour and one all-important major title in the 2013 US Open.

Following his maiden major victory that came 20 years on from his first encounter with Stewart, Rose spoke of another encounter he had with the former PGA Tour great, coming across his statue at Pinehurst where he was defending his US Open title.

As a result, Stewart won his second US Open championship at the North Carolina course in 1999 just four months before his death, earning him a commemorative statue at the 18th green of the 2014 US Open course.

And, Rose admitted when he saw the tribute to his idol on the final hole at the major event it gave him the inspiration to hole a putt similar to the one that Payne did for his 1999 triumph.

“I was really taken back by the life-size statue of Payne on the 18th hole… I tried my best to emulate him by becoming a two-time US Open winner for the similarities stopped right there,” He joked.

“Until I landed on the 18th green and I had a putt remarkably similar to the one Payne holed to famously beat Phil in 1999. I managed to hole the putt just as Payne did and I had a moment of attempting Payne’s famous celebratory pose.”

Race to Dubai prize money breakdown: How much can European Tour stars earn?