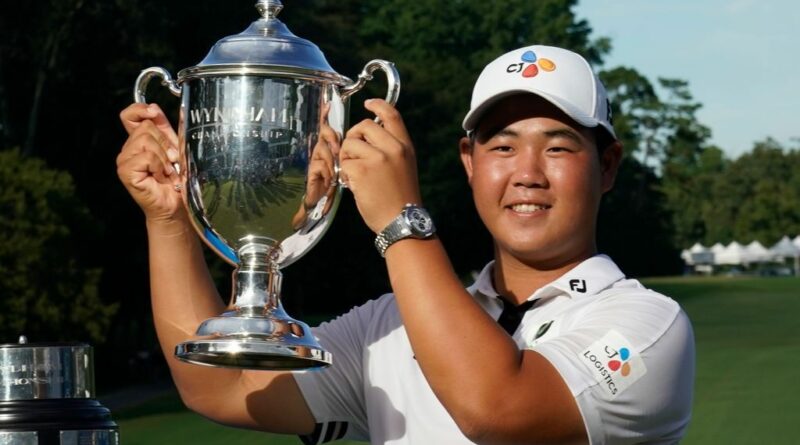 GREENSBORO, N.C. — Joohyung “Tom” Kim announced his arrival on the PGA Tour when the 20-year-old South Korean closed with a 9-under 61 for a five-shot victory in the Wyndham Championship on Sunday, making him the second-youngest winner on tour since World War II.

A marathon day because of storm delays turned into a sprint for Kim. He finished the third round in the morning and was two shots behind, and then shot 27 on the front nine to leave the rest of the field in his wake.

No one came close the rest of the way.

The victory gave Kim instant membership on the PGA Tour, making him eligible for the FedEx Cup playoffs that start next week. He is No. 34, assured of playing two postseason events and with a reasonable shot at getting to the finale at East Lake.

Sungjae Im, who finished seven holes Sunday morning to take the 54-hole lead, had a 68 and tied for second along with John Huh (67).

Kim is the first PGA Tour winner born after 2000. Jordan Spieth was 19 when he won the John Deere Classic for his first tour win.

“I can’t believe it,” Kim said, and then added with a laugh, “I didn’t know golf was this stressful.”

It sure didn’t look that way for Kim, who opened the tournament with a quadruple-bogey 8, laughed it off and then finished the week at 20-under 260 at Sedgefield Country Club.

It was plenty stressful for others, even those who weren’t playing.

The heartbreak belonged to Justin Lower, who was poised to move into the top 125 in the FedEx Cup to reach the postseason and secure a full card for next season.

But on the final hole, Lower hit his 60-foot birdie putt a little too firm. That left him a 6-foot par putt that would have put him inside the top 125. He missed it to the right and was wiping away tears as he walked off the green.

“I don’t really know what I’m thinking,” Lower said. “It sucks to come up this short. Obviously had some help with the LIV guys and whatnot — I don’t even know if I’m allowed to say that. But I don’t know. There’s positives. But right now, it just flat out sucks.”

The tour has suspended players who signed on with Saudi-funded LIV Golf, and they did not count toward the top 125 in the FedEx Cup. Lower was the equivalent of No. 128 going into the final event of the regular season.

Rickie Fowler looked to be out of luck when he missed the cut Friday at No. 123. But enough players faded on the weekend, such as Brian Stuard, that Fowler got to extend his season for at least another week at the FedEx St. Jude Championship next week.

Two players were knocked out of the top 125 — Matt Wallace (124) and Austin Smotherman (125), who needed par on the final hole of the second round and took double bogey.

Max McGreevy, who was the equivalent of No. 126, tied for fifth to move to No. 104. The other went to Kim, who was not part of the standings until he accepted membership with his win. Along with a pair of top 10s, including third place at the Scottish Open, Kim moved to No. 34.

Kim — he goes by “Tom” from his fascination as a kid with Thomas the Tank Engine in the TV series “Thomas & Friends” — moved to No. 21 in the world ranking. Only Sergio Garcia and Rory McIlroy reached that high in the ranking at a younger age.

And he did it in similar fashion to McIlroy winning his first PGA Tour event in 2010, when he shot 62 in the final round at Quail Hollow.

Kim rolled birdie putts of 20 feet and 25 feet on the second and third holes. He followed with a 12-foot birdie putt at No. 4, an 8-foot eagle putt on No. 5 and an 18-foot birdie on the next hole. He closed out the front nine with two more birdies for a 27 and was on his way.

Kim’s only dropped shot was a bogey from finding deep rough off the tee at No. 10. Otherwise, the outcome was rarely in doubt the rest of the way.

Kim was featured in a news conference with Greg Norman at the Saudi International earlier this year when LIV Golf announced it was upping its investment in the Asian Tour to $300 million this year. Kim won his first Asian Tour title in Singapore at the start of the year.

But he has said his lifelong dream was to play on the PGA Tour, and he got there in style.

Along with qualifying for the FedEx Cup playoffs, Kim should expect to be part of the International team for the Presidents Cup next month. 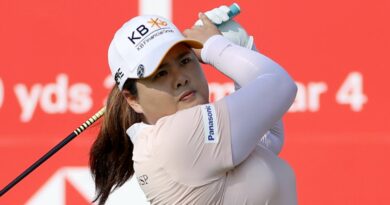