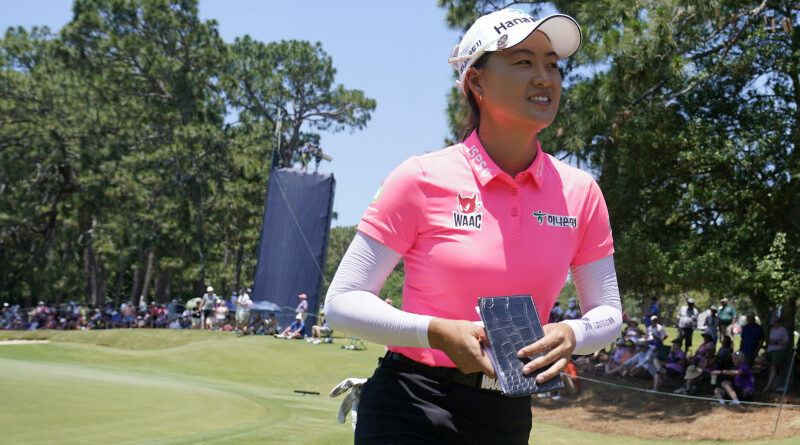 Lindblad’s six-under 65 gave her the early lead Thursday at Pine Needles with Lee and another Swede, Anna Nordqvist, in the clubhouse at four-under with players still on the course.

Because she is an amateur, Lindblad wouldn’t be able to collect the record $1.8 million (A$2.5m first-place prize if she holds on to win the event. She would have had to declare as a professional before the tournament began.

When asked if, in hindsight, that was a mistake, the 22-year-old known to her friends as “Iggy” paused and said with a smile, “I’m going to stay in college for like another year or so.”

“But when you say it, yeah… it would have been fun to win a little bit of money,” she said. 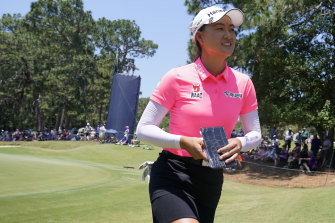 Minjee Lee heads to the fifth tee at Pine Needles. The Australian is well in the hunt after the first round of the US Women’s Open.Credit:AP

Lindblad finished tied 30th at six-over 292 in her only other US Women’s Open appearance in 2020.

She set the tone for a strong opening round in Southern Pines by winning the Southeastern Conference individual championship in April after making a 38-foot eagle putt on the 18th hole.

“I played really good at SECs, and then at nationals I didn’t really get anything to drop,” Lindblad said. “I hit it good but I didn’t make any putts. I feel like that was the difference then to today. I just had fun out there.” 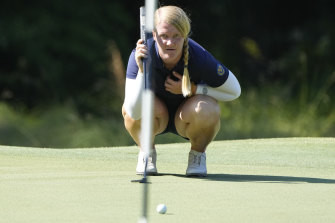 Ingrid Lindblad had her eye in during a record-breaking round.Credit:AP

Lindblad said she had no idea she had broken the amateur record until her coach told her as she was walking off the course.

She was in the zone from the start on Thursday.

While she only hit eight of 14 fairways, she just needed 26 putts to complete the round. Her only hiccup was a bogey on the par-5 10th hole. But she made up for it with seven birdies, getting a first pump from Sorenstam after draining a putt on hole No. 2.

Catherine Lacoste, the daughter of French tennis player Rene Lacoste and 1927 British Ladies Amateur champion Simone Thion de la Chaume, was the only amateur to win the US Women’s Open back in 1967.

Lindblad didn’t baulk at the chance to become the second.

“She’s really impressive,” Sorenstam said. “I think people see her as a long hitter, but I’m sure you saw her today, some of those chip shots she hit, especially here on 18, that was not an easy one.

“She just kind of stood there, really good touch, and she putted beautifully today, good speed. I was really impressed.” 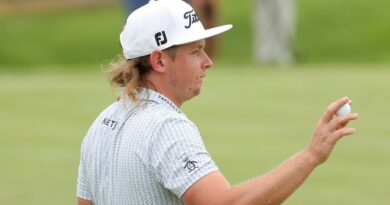