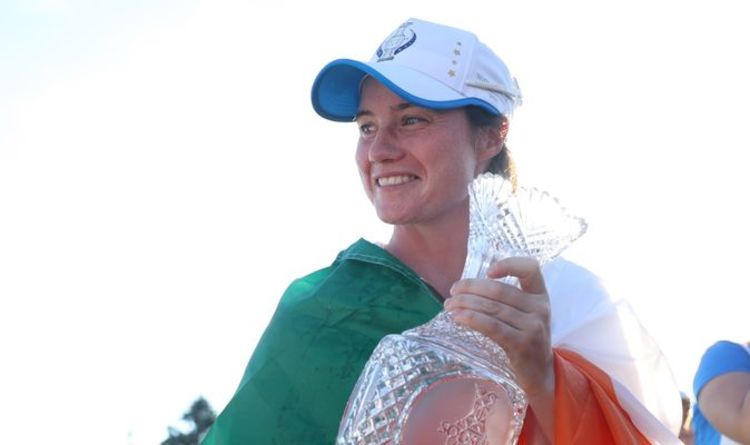 Leona Maguire said she ‘gave her absolute all’ following her remarkable Solheim Cup debut for Team Europe. Maguire proved to be Europe’s breakthrough star at the 2021 event, as her tally of four-and-a-half points made her the most successful Solheim Cup rookie of all time from either side.

The Irish debutant capped off a scintillating week in Ohio with a final-day victory in her singles match, defeating America’s Jennifer Kupcho in style with a crushing five and four victory to earn her rookie record status.

The 26-year-old’s heroics throughout the week helped her side make some Solheim Cup history of their own, as the 12 European heroes secured just their team’s second win on American soil with a 15-13 victory in Ohio.

Following her remarkable performance in blue and gold, Maguire admitted she gave everything to win her singles match against fellow debutant Kupcho.

She said: “The goal was to get my point, that’s all I can do. I’ve given it my absolute all this week, I couldn’t have given anything more. I couldn’t have asked for a better week.

“Jen is a world-class player. We’ve done battle many times in college. This wasn’t the first, and it will definitely not be the last. I knew I was going to have to play some really good golf to beat her today.”

After a superb opening two days, Maguire’s hot form continued into her final day showing, after eagling the par-five second in her singles match, before picking up all-important birdies on four, six and seven to give her a commanding lead at the turn.

Speaking about her scintillating singles showing, she added: “Got off to a great start. That eagle on two really sort of set me up and I holed some really nice putts, and just really kept my foot down all day.”

As a result, Maguire went on to say that her Solheim Cup debut was better than she had ever dreamt it would be, paying tribute to her 11 teammates who she admitted she could not have done it without.

She commented: “It’s been an incredible week. It’s a dream come true to be here to go and win a Solheim Cup on American soil, you can’t even imagine. We had a phenomenal team this week from top to bottom and this is an experience I will probably never forget.

“Never in my wildest dreams did I think the week was going to go this way. It’s been an honour to represent Europe and the trust that Beany (Matthew) and all the (vice-)captains had in me was incredible.

“It’s given me a massive confidence boost and I wouldn’t have been able to do it without them.”

location Courses View More Courses Locations View More Locations No results found. Please try another search. Search Eddie peppers the waterEddie Pepperell was disqualified from the Turkish Airlines Open in November after running out of balls during the third round. The Englishman suffered an embarrassing exit at the European Tour’s Rolex Series event after he failed to complete the fourth hole, his 13th of the day.Pepperell was two over par for the round after back-to-back birdies at the second and third, when he struck his approach to the fourth into the water surrounding the green. Eddie Pepperell made a splash in Turkey window._seedtagq = window._seedtagq