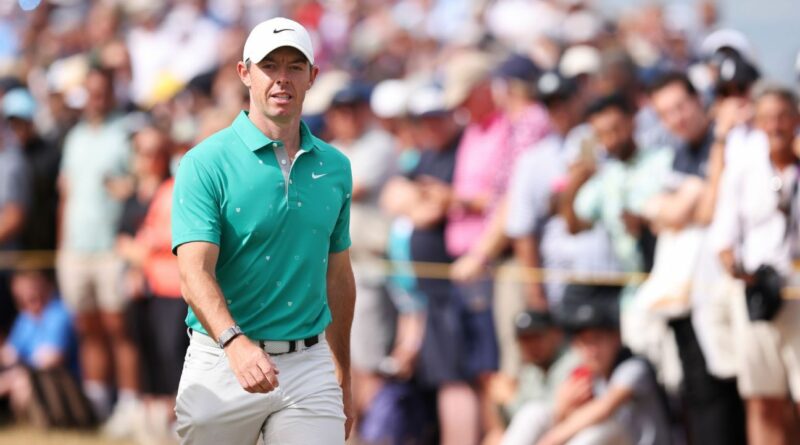 ST. ANDREWS, Scotland — Rory McIlroy moved into the void left by the departure of Tiger Woods at The Open, holing a bunker shot for eagle and revving up the gallery at St. Andrews at every turn Saturday as he moved closer to ending his stretch of eight years without a major.

Still to come is one more round on a stage he shares with Norwegian star Viktor Hovland. They each posted a 6-under 66 in the third round, building a 4-shot cushion by avoiding the blunders that sent so many contenders in the wrong direction.

Dustin Johnson putted across the green and into a bunker and fell 6 shots behind.

McIlroy and Hovland had no such trouble Saturday, ending the day at 16-under 200.

Hovland holed a pair of 40-foot putts on his way to four straight birdies on the front nine to seize the lead. McIlroy finally caught him by holing out from a pot bunker some 80 feet away for eagle on the 10th hole, setting off a roar that could be heard all the way back at the Royal & Ancient clubhouse.

McIlroy only a day earlier tipped his cap to Woods as he started his second round and Woods was on his way to missing the cut, crossing the Swilcan Bridge for what might have been the last time. The R&A set the tee times that way so they would pass each other.

Woods stands alone in driving the sport, although McIlroy is now the most popular worldwide, and it sounded like that — on the first tee when McIlroy was introduced, for every birdie and when he took the lead for the first time with a birdie on the 14th.

“I love that I’ve got so much support,” McIlroy said. “But at the same time, I need to keep in my own little world and try to play a good round of golf. Hopefully, that’s enough.”

His lone mistake was coming out of the left rough and over the 17th green, across the road and near the stone wall. He played a safe pitch onto the green and two-putted for bogey.

Hovland, bogey-free for the round, showed off some magic of his own on the 17th by putting off the dirt path just short of the road, up the hill to about 5 feet for a par.

At 24, Hovland already has six wins around the world after a stellar amateur career at Oklahoma State, including a U.S. Amateur title at Pebble Beach.

This is his first big moment in a major, and he sounded up to the task. Hovland also saw — and heard — what the will be up against Sunday.

“I get a couple in there,” he said of the cheers so heavily slanted toward McIlroy. “I’m probably an underdog, but I don’t mind that at all. Hopefully, we can push ourselves tomorrow.”

Smith missed a short birdie chance on the 18th and had a 73. His biggest mistake was not getting the ball back in play on the 13th, instead trying to advance the ball and getting into tough spots. He also three-putted from 30 feet to start his round and made just two birdies.

Young, the PGA Tour rookie who finished 1 shot out of a playoff at the PGA Championship two months ago, had a 71.

Masters champion Scottie Scheffler was lurking after a 69. He missed a 10-foot birdie chance on the 16th and then three-putted the 17th for a bogey. Scheffler, who finished 1 shot behind in the U.S. Open, had a 69 and was 5 strokes back along with Si Woo Kim (67).

Johnson also was within 3 shots until a bogey on the 13th and another on the par-5 14th, where his long eagle putt raced up a hill, across the green and into a pot bunker. Instead of birdie, he had to scramble for bogey. He dropped two more shots coming in for a 71 and was 6 behind.

McIlroy last won a major in 2014 at the PGA Championship at Valhalla. He would love nothing more than to win at the home of golf, on the Old Course where Jack Nicklaus once said a player’s career would not be complete without winning the Claret Jug at St. Andrews.

“Every part of my game has felt good this week,” McIlroy said. “I just need to keep it going for one more day.” 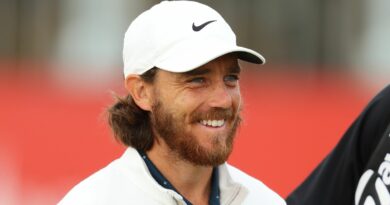