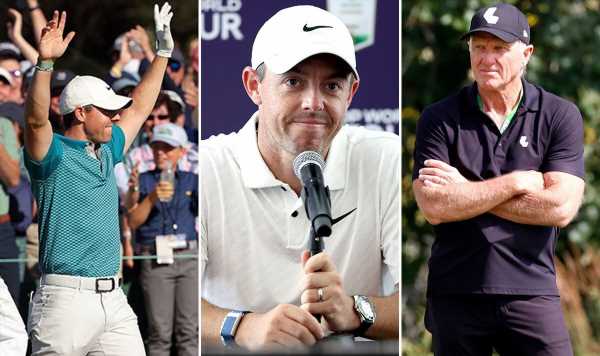 Rory McIlory may not have won a major championship in 2022 but the year should still be remembered as one his greatest. The Northern Irishman reclaimed his status as the best golfer in the world, won three PGA Tour titles and led the fight against LIV Golf after the fractious emergence of the contentious Saudi-backed rival series.

There was a devastating near miss at the 150th Open Championship at St Andrews and this was not to be the year that McIlory would break his eight-year major duck, despite such consistent brilliance. But he can still reflect on a special year in which he reinstated himself as the world’s best player and enhanced his reputation off the course.

Express Sport looks back at five of McIlroy’s most memorable moments in an unprecedented year for the sport:

This moment of magic from the 18th bunker on Sunday at Augusta in April proved the catalyst for his incredible exploits in 2022 and reminded fans why he is now the sport’s most box-office star.

McIlroy was the only threat to runaway leader Scottie Scheffler at the Masters, and threw his club in jubilant scenes as he holed out with an epic shot from the sand at the last. The piece of artistry was McIlroy’s 64th shot, completing his lowest round at Augusta National. And while the hole-out wasn’t enough for victory, the shot proved a firestarter for more success.

McIlroy’s remarkable consistency in 2022 is made all the more impressive as he also became the leading spokesperson against the LIV Golf venture. He has remained candid and forthright in his views throughout a year that has shaken golf to its core.

The 33-year-old immediately distanced himself from Greg Norman’s plans before LIV’s inaugural season, claiming he would not want to tarnish his reputation for the extra millions. And LIV’s CEO and firebrand Norman has become a particularly frustrating figure for McIlroy. The world no.1 clearly had enough of the sport’s chief disruptor in November, when he emphatically told Norman to ‘exit stage left’ and quit his role so the ‘adults’ could reach a peace settlement.

There can be little doubt that McIlroy’s distaste towards LIV has fuelled his stunning resurgence on the course. He became world number one once again with victory at the CJ Cup in October, but perhaps the most memorable victory of the season came at the Tour Championship, which sealed his third FedEx Cup triumph.

DON’T MISS:
LIV Golf 2023: What’s next in the PGA Tour battle and can they win over Woods and McIlroy?
Charlie Woods put on the spot by Justin Thomas with ‘snoopy hat’ question as Tiger cringes
Charlie Woods gives first ever TV interview alongside proud dad Tiger – ‘It gets heated’

McIlroy surpassed Tiger Woods’ tally of two FedEx Cup wins by holding off Scheffler in an epic battle to create another piece of history at East Lake in September.

Much of McIlroy’s frustration with LIV has concerned his Ryder Cup teammates jeopardising their opportunity to play in future biennial jousts against the USA by taking the guaranteed Saudi riches.

Henrik Stenson was stripped of the Ryder Cup captaincy for next September’s showdown in Rome following his LIV switch, and Sergio Garcia, Lee Westwood, Ian Poulter, Martin Kaymer and Graeme McDowell have all turned their back on golf’s traditional ecosystem after establishing strong bonds with McIlroy.

“I think it is the first time in my life that I have felt betrayal, in a way,” McIlroy memorably told the Guardian in October. “It’s an unfamiliar feeling to me. You build bonds with these people through Ryder Cups and other things. Them knowing that what they are about to do is going to jeopardise them from being a part of that ever again?”

It was a year that could have only been embellished by a major championship. As well as claiming his third FedEx Cup crown to prove he is the best PGA Tour player, McIlroy was also cream of the crop on the DP World Tour.

McIlroy finished top of the DP World Tour rankings to claim his fourth Harry Vardon trophy, the honour given to the leading player on the formerly known European Tour. He could not end with a victory at the Earth Course in Dubai, but his fourth place finish at the season closing DP World Tour Championship was enough to maintain his position on the summit of the rankings.