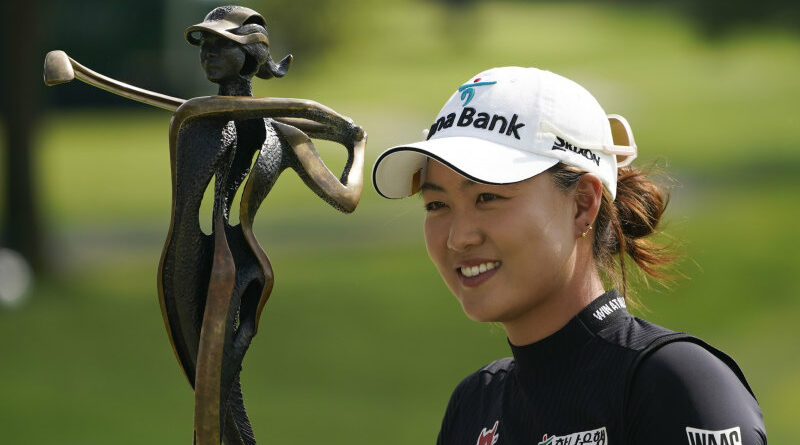 After a season of knocking on the door, Perth golfer Minjee Lee finally broke through for her first LPGA Tour victory of the year with a two-shot win at the Founders Cup in New Jersey.

But getting to the trophy presentation was, in Lee’s own words, “a fight” after a frustrating final-round that saw the 54-hole leader scratching at 1-over for the day by the 11th hole. 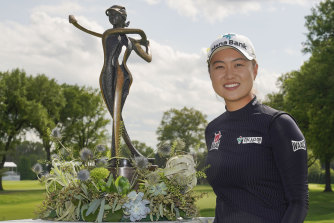 The 25-year-old “fought really hard” however and finally made three birdies on the back nine, at 12, 14 and 18, to hold off American Lexi Thompson and claim her seventh LPGA Tour title at the Upper Montclair Country Club course.

Lee’s round of 70 was her first at the tournament not in the 60s – a second-round 63 the highlight – and was below her LPGA Tour-leading scoring average of 68.89.

But it was enough for Lee to break through for her first win since claiming her first major at last year’s Evian Championship in France.

The world No.5 will see her world ranking climb after the win, which will push Lee ahead of Cam Smith (5) as Australia’s highest ranked golfer. 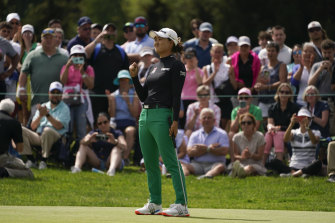 Minjee Lee reacts as she sinks her final putt to win.Credit:AP

“I just feel like I’ve kind of been trending,” Lee said.

“I’ve been hitting it really, really well this whole — I mean, this whole season, and I just felt like it was kind of around the corner. I kept knocking on the door, and here I am now.

“In the very beginning I missed a couple of short putts and didn’t catch that momentum and through the middle to the back part of my round, my ball-striking went out the window. But I fought really hard just to make a couple of birdies and to come out with a win is really special.

“I was just proud of myself I was able to play four good rounds of golf and I was able to fight through this round and come away with a win.”

Lee had contended several times in 2022 in her seven starts, but her best results had been a tie for second and a tie for third. And she invited rivals to challenge when she dropped shot on the par-3 eighth hole.

But the two-time Olympian actually took heart from the “good bogey”, given her ball had landed on the sod wall of a bunker. It took two shots to get out, but Lee minimised the damage and rallied to victory.

After watching putts slide by, they dropped when it mattered on the back nine.

“I was actually quite calm the whole day,” Lee said. “My emotion was actually just very, very level, so it was just nice just to win. I think that’s why I celebrated.”

Looking for her first LPGA Tour win since 2019, Thompson rallied from three down and grabbed a share of the lead with a birdie at No. 10. Thompson and Lee traded birdies on the par-5 12th, but Thompson closed with six straight pars for a 69. Thompson had birdie opportunities on the final two holes that she failed to convert before Lee closed it in style with a short birdie of her own.