Home » Golf » ‘Not here for a jolly’: Englishman’s quest to spoil at Australian Open

A weary Paul Casey insists he hasn't come to Sydney for a holiday as he plans to crash the party for Australia's best, who will headline an event also sprinkled with Sergio Garcia stardust.

The affable Englishman, the world No.14 and top ranked player in the Australian Open field, landed on Monday after an arduous trip and is trying to put his name on one of the most famous trophies in golf. He's also scrapping for vital rankings points before next year's Tokyo Olympic Games. 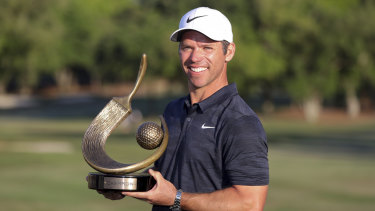 Paul Casey will be the highest ranked player in the Australian Open field.Credit:AP

Casey won on both the USPGA and European Tours this year and is likely to fly under the radar in the build-up for a tournament boasting what many have described as the deepest field assembled for the national championship in almost a decade.

Casey headed straight for the range on Monday after his long-haul flight and left no one under any misconception about his desire for the week.

I can go a lot of places in 14 or 15 hours and take the family. So I didn’t just come down here to have a jolly

"I have had two victories this season thus far," he said. "I would love to add a third. One of my big goals next year is to make the Olympic team. I want every single ranking point I can get.

"I have spent 14 or 15 hours on a plane. I can go a lot of places in 14 or 15 hours and take the family. So I didn’t just come down here to have a jolly. I am going to enjoy it. And I will enjoy it by playing good golf and interacting with the crowd.

"There is something about [the Australian Open] being standalone that sets it apart. It was almost a fifth major at one point. It’s good being back in Australia as at this time of year I would be at home doing nothing, probably drinking wine."

Casey and Garcia are poised to form part of Europe's powerful Ryder Cup team when it tries to defend its crown on American soil next year and will be an interested onlooker for next week's Presidents Cup at Royal Melbourne.

Even allowing for the regularity of his international travel, he was still trying to gather himself after arriving in Sydney to start his Australian Open preparation.

"My last event was the DP World in Dubai two weeks ago and I then headed home to the [United] States for three to four days and then I’m on a 14-hour flight from LA leaving Saturday night and arriving [on Monday] so I don’t know what's going on at the moment," Casey said.