Australian Open contender Denzel Ieremia is carrying the initials of slain college teammate Celia Barquin Arozamena on his bag as the New Zealander prepares for the biggest weekend of his short professional career.

Ieremia, whose relatives have represented the All Blacks and Silver Ferns, is perhaps the most unlikely name near the top of a leaderboard packed with overseas contenders after the second round. 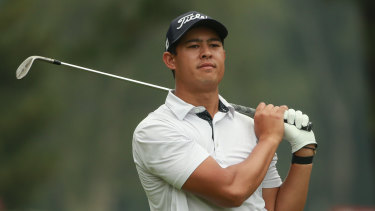 But the memory of his former Iowa State college friend Arozamena is never far from Ieremia's thoughts. The talented Spanish golfer was murdered by a homeless man while she was playing in the US last year.

The man was jailed for life without the possibility of parole.

Europe's Ryder Cup players wore yellow ribbons in memory of Arozamena during last year's triumph over the US and Ieremia's Iowa State teammates have carried their own tribute since.

"All the guys on the team have a badge on their bag that says 'CBA', her initials," Ieremia told the Herald. "They always wear yellow ribbons and that's how we support her family.

It's amazing how many people she's reaching at the moment and how widely received it was worldwide.

"She was a good friend of everyone on the team and it was just a terrible incident. She was a really good player as well.

"It's amazing how many people she's reaching at the moment and how widely received it was worldwide. You can see it in golf in the Ryder Cup, you can see it in [American] football with the Big 12 Conference.

"It was a sad loss for her family and the Iowa State community, but there's still positive things coming from her."

Ieremia turned professional only after graduating from college last year. He has risen to No.771 in the world rankings after finishing sixth at last week's NSW Open.

He was inspired to take up golf at the same time as his father and grandfather, and carries a famous sporting pedigree, with second-cousin Alama playing 30 Tests for the All Blacks and relative April a netball international.

"It's cool to have them competing at the highest level of their sport and I want to do that one day," Ieremia said. "The fact they've achieved at that level gives me the belief I can do it. They send me the odd message, 'good luck. Congrats. Keep doing you'.

"Mum reckons I watched a Greg Norman video when I was one and started hitting golf balls around the house. When I started a bit later at six or seven, my dad and granddad also started and we learnt at the same time together. It was a good experience."

Ieremia zipped around the Australian Golf Club with a six under 65 on Friday to move to eight under for the tournament, two shots behind former champion Matt Jones.

Asked about the prospect of being in one of the final groups for the third round of the Australian Open, Ieremia said: "That's what you practise for and what you work hard for. I'll just enjoy it and stick to my game."

The Open first round tee times: What time do Tiger Woods, Rory McIlroy start on Thursday?

Marcus Rashford out for a ‘few weeks’ with back injury, says Ole Gunnar Solskjaer
We and our partners use cookies on this site to improve our service, perform analytics, personalize advertising, measure advertising performance, and remember website preferences.Ok