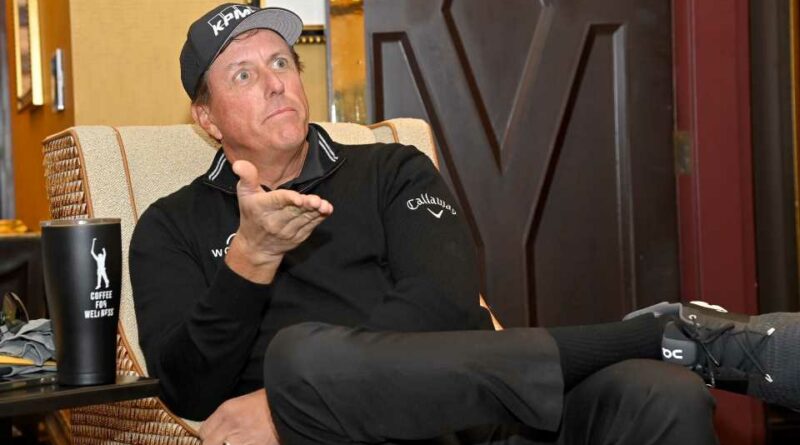 The fifth edition of “The Match” was the first one that golf legend Phil Mickelson didn’t compete in, but he still managed to participate from another place: the broadcast booth. He did not disappoint in his new role.

Friday’s event, which featured rivals Bryson DeChambeau and Brooks Koepka going head-to-head, was Mickelson’s official debut as a commentator — he has joined the booth in the past as a guest. Twitter loved his contributions to the Turner production.

One unique element of “The Match” is that the competitors have an airpod in one ear so they can constantly communicate with the broadcast team. Viewers are then able to hear the announcers talk golf with the competitors on the course. Mickelson’s discussions with DeChambeau and Koepka were on point from the beginning.

After DeChambeau hit his first “bomb” of the round, Mickelson asked him if he thinks hitting bombs makes him more attractive.

Mickelson made headlines before the golfers even hit the course. He joined Bleacher Report’s prematch show to discuss the competition. Mickelson said that he thought Koepka would take an early lead but DeChambeau would win. He was right about the first part, at least. Koepka made sure to remind Mickelson that his prediction was wrong as he continued to dominate.

This wasn’t the only thing Mickelson predicted Friday. He regularly called Koepka’s approaches, and most of the time he was right.

At times, Mickelson’s techincal golf talk went over the head of fellow commentator Charles Barkley. Barkley made sure to ask for clarifications for himself or casual golf fans.

Fans on Twitter responded mostly positively to Mickelson. Many asked him to become a broadcaster whenever he retires from golf. Luckily for them, it appears Mickelson is interested in continuing his television career in the near future.

“We’re always in discussions about Phil’s future It wouldn’t surprise me if in the next 12 to 24 months you might see more of Phil on the air,” Mickelson’s agent, Steve Loy, told Front Office Sports ahead of “The Match.”

A sampling of responses to Mickelson’s commentary:

HOT OR NOT: Rory McIlroy can beat anyone… while Saracens are lucky

Will barren run end at last? Only two English major wins in last 96