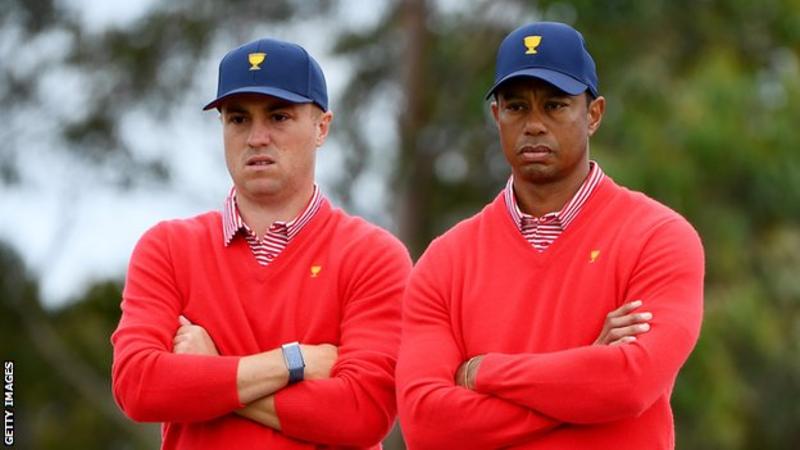 The International team took a 4-1 lead over the United States after the opening-day fourballs in the Presidents Cup at Royal Melbourne in Australia.

US playing captain Tiger Woods and Justin Thomas secured their side’s only point as they beat Marc Leishman and Joaquin Niemann 4&3.

“This is an unbelievable start,” said International captain Ernie Els.

“We haven’t had a start like this for many years.

“It’s really nice to have some points on the board. There were a lot of tight matches and a lot of crucial putts, and great golf shots.”

The win by Woods and Thomas over Australian Leishman and Chile debutant Niemann put the first point on the board but it was downhill from there for the US side.

South Africa’s Oosthuizen and Mexico’s Ancer, who was also making his debut, made it 1-1 before home favourite Adam Scott and South Korea’s An Byeong-hun put the Internationals ahead with a 2&1 win over Bryson DeChambeau and Tony Finau.

Canada’s Adam Hadwin and South Korean Im Sung-jae extended the lead when they earned a hard-fought 1-up victory against Xander Schauffele and Patrick Cantlay.

Patrick Reed, who was heckled by the crowd around the first tee following the controversy of his rule break at the Hero World Challenge last Friday, missed a long putt on the 18th as he and Webb Simpson lost to Japan’s Hideki Matsuyama and CT Pan of Chinese Taipei.

“This is a long four days. I mean, we have to go earn this cup,” said Woods.

“Just because we lost the session doesn’t mean the cup’s over. There’s a long way to go, a lot of points available.

“The guys will regroup and we’ll come out tomorrow ready to go.”

Woods again pairs himself with Thomas on the second day, with Matt Kuchar and Rickie Fowler coming in for their first games.

Sentry Tournament of Champions: Xander Schauffele shoots 11-under 62 to claim first victory of 2019

BMW PGA: Tommy Fleetwood and Ian Poulter in contention ahead of final round at Wentworth

Tiger Woods net worth: The Masters champ has a staggering fortune – how much is he worth?