Tiger Woods is ‘the alpha’ of the PGA Tour group who are plotting the fight against Saudi-backed LIV Golf, reveals Rory McIlroy, as he hails ‘the hero we’ve all looked up to’ for his role

Tiger Woods took the lead in the meeting of golf’s top players on Tuesday, as they addressed the PGA Tour’s plans to fight back against LIV Golf’s threat to the established order of the sport.

Woods flew to Wilmington, Delaware on Tuesday on his private jet for a private meeting of top players to discuss the threat of the Saudi-funded breakaway ahead of the BMW Championship.

He has not qualified for the second FedEx Cup playoff event but jetted in to attend a conference of 22 players that lasted for three-and-a-half hours, before he was pictured leaving the venue, the five-star Hotel du Pont, on Wednesday night.

And Rory McIlroy has revealed Woods, 46, made himself heard with a hands-on approach to finding ‘actionable steps’ to secure the Tour’s future. 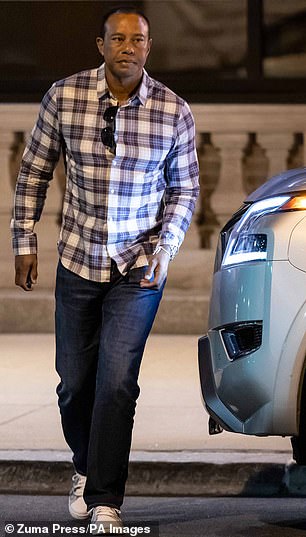 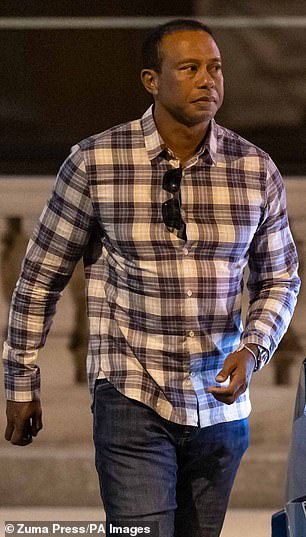 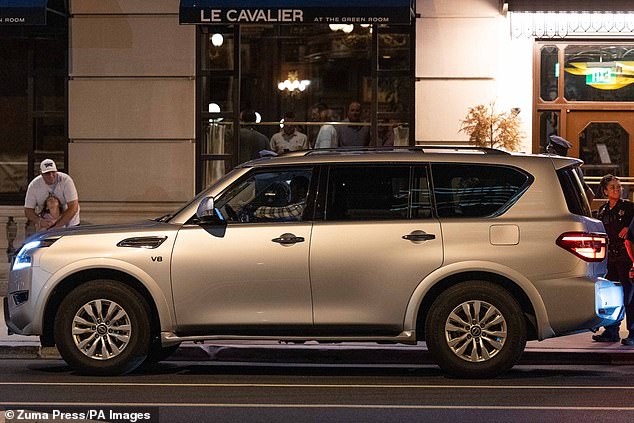 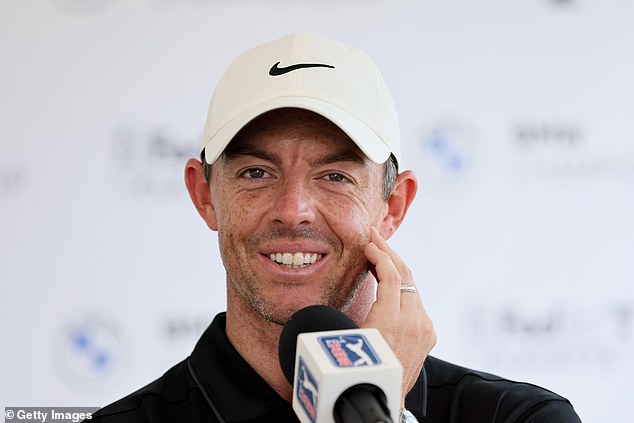 ‘We’re all great players but we’re not Tiger Woods,’ McIlroy said on Wednesday. ‘He is the hero that we’ve all looked up to and his voice carries further than anyone else’s in the game of golf. His role is navigating us to a place where we all think we should be.

‘I think it’s pretty apparent that whenever we all get in the room there’s an alpha in there and it’s not me. He cares a lot.’

McIlroy and his colleagues have kept tight-lipped about what was agreed in the meeting but it is understood the Tour’s top players agreed on trying to find ways to face each other more often – while avoiding LIV Golf rivals outside of majors.

Xander Schauffele, ranked sixth in the world, said there was ‘new’ and ‘fresh’ ideas raised at the meeting.

And Woods was at the center of the bid for unity among those who have not defected to LIV Golf.

Bryson DeChambeau, Phil Mickelson, Patrick Reed and Dustin Johnson are all among the players who have been tempted to switch by big-money cash-guaranteed contracts offered by the Saudi tour. Cameron Smith, ranked No 2 in the world and mooted to be the next defector, was not present at Tuesday’s meeting. 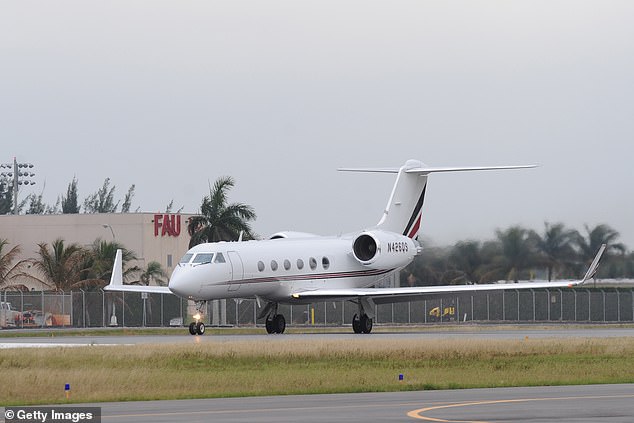 Woods’ private jet, pictured in 2010, which flew him from Florida to Philadelphia on Tuesday 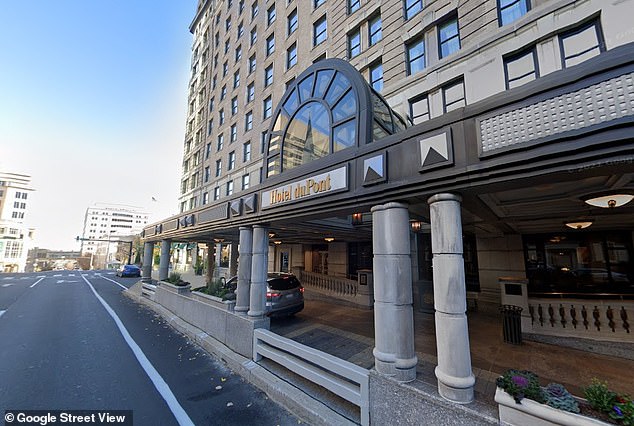 ‘He’s carried the tour for a long, long time. Players that were his contemporaries, we’ve all benefited from that.’

Last week, LIV Golf hinted at a more prominent role from Woods in preventing the success of the Saudi breakaway, accusing the PGA Tour of getting him to ‘publicly criticize’ younger players for switching.

He reportedly turned down a $800million offer of his own to join LIV Golf.

The accusations were made in court documents submitted initially by 11 LIV Golf rebels, though Carlos Ortiz has since withdrawn his name, as part of an antitrust lawsuit filed against the PGA Tour last week. 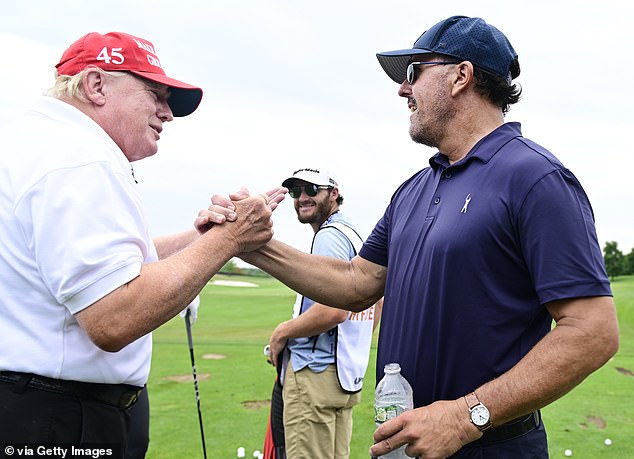 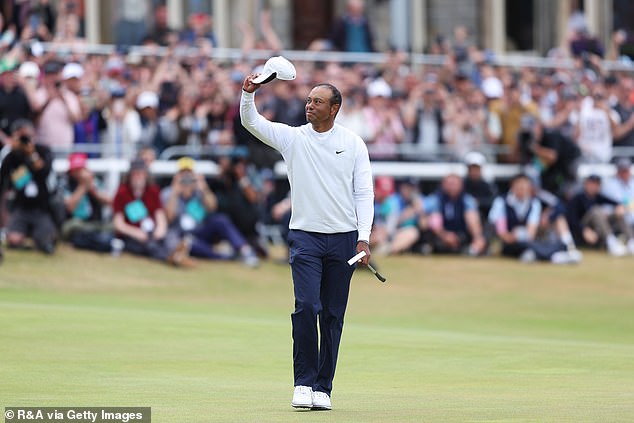 In the lawsuit, filed August 3, the plaintiffs accused the PGA Tour of getting the 46-year-old to ‘do its bidding’ by publicly attacking his fellow professionals.

It read: ‘The Tour also got Tiger Woods to do its bidding and publicly criticize golfers— particularly younger golfers—for joining LIV Golf by suggesting they would never play in The Masters, The Open, or other Majors and would not earn OWGR points.’

The 15-time major champion spoke out against LIV Golf ahead of the 150th Open at St Andrews in July as he savaged the Saudi rebels for ‘turning their back’ on the sport.

‘I disagree with those who have gone to LIV, I think they have turned their back on what allowed them to get to this position,’ he began. ‘Some players have never had a chance to even experience playing on one of the tours.

‘They have gone right from the amateur ranks to that organization and never really had a chance to feel what it is like to play a schedule or play in big events.’ 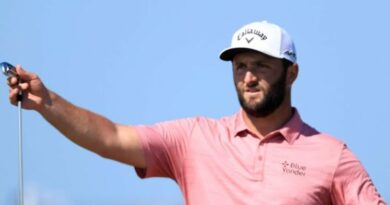