Home » Golf » Ryder Cup 2021: When are Friday’s pairings announced for foursomes and fourballs?

Whistling Straits, Wisconsin, plays host to the 43rd Ryder Cup this week with Team Europe looking to defend their title from three years ago. Team USA were thrashed by the Europeans at Le Golf National in Paris and there will be some pressure on their home turf to enact revenge.

USA captain Steve Stricker arguably has the strongest team on paper with more players inside the top 10.

Jon Rahm is the sole top-10 representative for Team Europe, although he does hold the No 1 spot.

But form arguably has nothing to do with it when the Ryder Cup comes around as players become instant heroes overnight.

Ian Poulter has become a Ryder Cup specialist over the years and was another captain’s pick for Padraig Harrington this time around.

The action officially gets underway on Friday, starting with the foursomes in the morning, followed by the fourballs.

Saturday follows the same pattern before Sunday’s showpiece where 12 singles matches take place throughout the day.

But anticipation will set in on Thursday evening at the official opening ceremony.

When will Friday’s Ryder Cup foursomes and fourballs be announced?

The opening ceremony is scheduled to start at 10pm (BST) on Thursday evening with live music while both teams will be officially introduced.

During the introductions, captains Stricker and Harrington will reveal their pairings for Friday.

Justin Thomas and Jordan Spieth are expected to be paired together once again after they won three matches in Paris three years ago.

Former world No 1 Dustin Johnson and Collin Morikawa have also been paired together in practice sessions this week.

Ian Poulter and Rory McIlroy was also a popular pairing by Thomas Bjorn in 2018.

But Tommy Fleetwood’s partner in crime from three years ago, Francesco Molinari, has not been selected this year, meaning the Englishman will have to find his best form alongside someone else.

The experienced duo of Sergio Garcia and Lee Westwood, who have played a combined 85 Ryder Cup matches between them, could also be paired together. 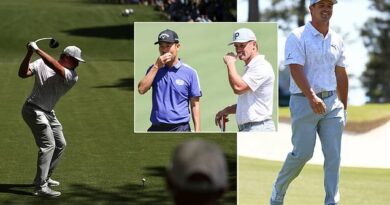 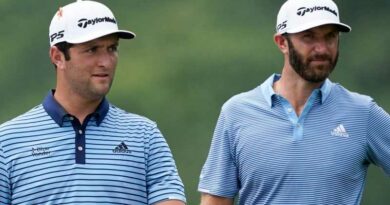