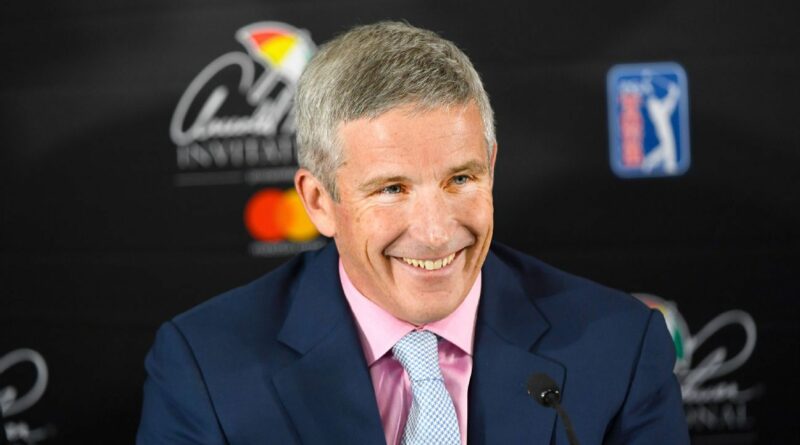 COLUMBUS, Ohio — PGA Tour commissioner Jay Monahan met with several agents of tour players at Muirfield Village Golf Club on Wednesday, and his message to them was once again clear, according to sources. Choose the PGA Tour or the LIV Golf Series Invitational, but players won’t be allowed to play on both circuits.

After LIV Golf released the names of 42 players who will compete in its first event outside London next week, the PGA Tour released a statement on Wednesday, which reiterated Monahan’s warning that players would face discipline for defying the tour’s position, including potential fines, suspensions and/or bans.

“As communicated to our entire membership on May 10, PGA Tour members have not been authorized to participate in the Saudi Golf League’s London event, under PGA Tour Tournament Regulations,” the tour’s statement on Wednesday said. “Members who violate the Tournament Regulations are subject to disciplinary action.”

The PGA Tour denied conflicting-event releases to players who had requested them on May 10. The first LIV Golf event coincides with the RBC Canadian Open in Ontario next week.

Rory McIlroy, speaking during a news conference ahead of the Memorial, which begins on Thursday, said there were a couple of surprises, but he wasn’t particularly impressed with the strength of the LIV field.

When ESPN asked McIlroy whether the tour should severely discipline its players who compete in the LIV events to dissuade others from doing it in the future, he took a softer stance on the threat of the breakaway circuit than he had in the past.

“I certainly don’t think they should drop the hammer,” McIlroy said. “Look, they are well within their rights to enforce the rules and regulations that have been set. But it’s going to end up being an argument about what those rules and regulations are. I have some very close friends that are playing in this event in London, and I certainly wouldn’t want to stand in their way for them to do what they feel is right for themselves.

“It’s not something that I would do personally. But I certainly understand why some of the guys have [decided to play in London], and it’s something that we are all just going to keep an eye on and see what happens over these next few weeks.”

Australia’s Matt Jones, who is among the PGA Tour players in the LIV field, said on Wednesday that “it was a good business opportunity for me and my family.”

“I like the concept, the idea of the three-day tournaments [and] the team format aspect of things is great,” Jones said.

Jones, a two-time PGA Tour winner, said he hoped the tour doesn’t ban players because they compete in the LIV Golf series, which is being fronted by Greg Norman, a two-time Open winner and former No. 1 golfer, and financed by Saudi Arabia’s Public Investment Fund.

“I have thought about that, which is something I had to weigh up,” Jones said. “I don’t think banning players is a good look for the PGA Tour, or for golf in general. I hope there is a way we can work around it. But I’m very comfortable with my decision and I’m looking forward to it. I think it’s going to be good. I’m just excited to go and play golf. I love to compete. And I’ve always enjoyed playing golf courses all around the world.”

Olazabal wells up when thinking about winning his two green jackets