Another celebrity golf match is set this week, though for the first time in this series it will be without Tiger Woods. Worried it will lack drama? Insert Charles Barkley, whose golf swing is, uh, interesting. (That’s being nice.) On Friday, he will team up with Phil Mickelson against three-time NBA champion Steph Curry and two-time Super Bowl winner Peyton Manning in “The Match: Champions for Change.”

Let’s just say Curry and Mickelson are getting a head start on heckling Barkley.

It started innocently enough, with a simple promo.

That’s when Mickelson got involved.

They couldn’t resist, and so Barkley got dragged into things.

This is the third match in this series. The first one pitted Mickelson against Woods. The second had Woods and Peyton Manning team up against Mickelson and Tom Brady. For that one, Barkley was part of the broadcast group. Now, Barkley, and his much-talked-about golf swing, will be on full display. 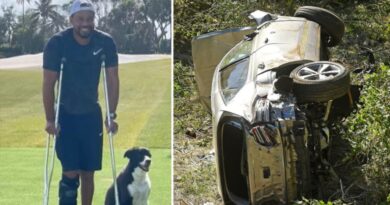 The Masters FAQ: A guide to the first major of the year