Bryson DeChambeau was labelled “stupid” and accused of being a brat over his Open outburst.

The world No. 6 sparked an angry backlash from sponsor Cobra after whining about his driver.

Watch Every Round of The 149th Open Championship LIVE with Fox Sports on Kayo. New to Kayo? Try 14-Days Free Now >

The angry American said: “If I can hit it down the middle of the fairway, that’s great, but with the driver right now … the driver sucks.

“It’s not a good face for me, and we’re still trying to figure out how to make it good on the mis-hits. I’m living on the razor’s edge like I’ve told people for a long time. When I did get it outside of the fairway, like in the first cut and whatnot, I catch jumpers out of there and I couldn’t control my wedges.

“It’s quite finicky for me because it’s a golf course that’s pretty short, and so when I hit driver and it doesn’t go in the fairway, it’s first cut or whatever, or it’s in the hay, it’s tough for me to get it out on to the green and control that. It’s kind of living on the razor’s edge, and if I can’t figure it out.

“It’s not the right design, unfortunately, and we’ve been trying to fix it (with no) results yet.’’

Bryson DeChambeau certainly knows how to frustrate his sponsors.Source:Getty Images

DeChambeau, 27, has a multimillion-dollar deal with Cobra, whose tour operations manager, Ben Schomin, said: “It’s really painful when he says something that stupid.

“He’s never really been happy, ever.

“Everybody is bending over backwards. We have multiple guys in research and development, in computer-aided design, trying to get this and that into the pipeline faster.

“It’s like an eight-year-old that gets mad at you — they fly off the handle and say, ‘I hate you’.

“But I know that if I got him cornered now and said, ‘What the hell did you say that for?’, he’d say he was mad.

“He didn’t really mean to say it that harshly — but it’s still not cool.”

DeChambeau apologised for his outburst on Thursday.

“My frustrations and emotions over the way I drove boiled over. I sucked, not my equipment — I deeply regret the words I used.”

Koepka had treatment on knee during offseason 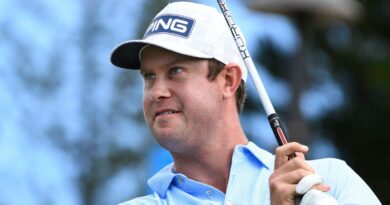