The two American Major champions have agreed a fragile truce in their spat the Ryder Cup in the national interest this week. But McGinley insisted there are always clashes in teams full of big talents and even bigger egos. He revealed he asked Sergio Garcia’s permission before appointing his best mate Padraig Harrington as his vice-captain at Gleneagles.

And Ulstermen Rory McIlroy and Graeme McDowell were involved in a court case where the four-time Major winner was suing his former management company.

Asked in his pre-tournament press conference if the USA lost Ryder Cups because the team did not get along, Mickelson responded: “Not only are we able to play together, but we also don’t litigate against each other. So that’s a real plus.”

But former captain McGinley recalled his team reacted by uniting on and off the course to retain the trophy.

“In 2014 there was a high court case going on between Rory and Graeme, and relations, to put it mildly, weren’t very good between them at that time. And so it was a situation that needed to be managed.

“A grenade was thrown in by Phil Mickelson where he made a smart comment. But we didn’t react to that. And in some ways that helped us because that brought Graeme and Rory together to say: ‘No, let’s be unified here and not overreact to this’.

“So, absolutely, I don’t think the European team should bring Bryson and Brooks up. Look at how well the European team behaved at the Solheim Cup. They took moral high ground in that rules controversy and didn’t throw a grenade in by saying anything in the media. Catriona Matthew did a wonderful job there with her team.”

“Padraig was obviously not going to follow any of his games,” he said.

“And the irony was that I come down after the first night into the team room and who’s playing table tennis against each other but Padraig and Sergio! We’ll be interested to see how Stricker is going to deal with Koepka and DeChambeau.”

McIlroy, who has played every session during his Ryder Cup career, is down to world No.15.

And Sky Sports Golf expert McGinley said: “I would put him with Sergio or Ian Poulter. He loves being the centre of attention and the main guy. He is not a guy you hide down the team. You want him to lead.

“Does he need to play five matches? I think a lot will depend on how he’s playing next week.
It is not set in stone.”

The Irishman, who sank the winning putt in 2002, added: “We’re really up against it. The bookies have us at 2-1 and I think that’s fair based on the world rankings. But never underestimate Europe. We love being underdogs and having a point to prove.”

D. Johnson tests positive for virus, out of CJ Cup 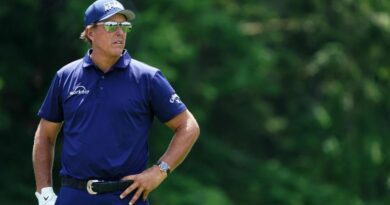