Home » Golf » Tiger: ‘Been gearing up for’ PGA Championship

SAN FRANCISCO — The damp, foggy, chilly surroundings at TPC Harding Park on Tuesday are not exactly the type of conditions Tiger Woods is embracing heading into the PGA Championship.

But Woods is well aware of summertime conditions in the Bay Area, and despite his lack of tournament preparation of late, he made it clear that the majors have been his focus.

“This is what I’ve been gearing up for,” said Woods, a 15-time major championship winner. “We’ve got a lot of big events starting from here, so looking forward to it. This is going to be a fun test for all of us. The rough is up. The fairways are much more narrow.”

The PGA is the first major championship of 2020, rescheduled from May because of the coronavirus pandemic. The U.S. Open is scheduled for Sept. 17-20 and the Masters for Nov. 12-15; the Open has been canceled.

“I’ve been trying to prepare for the three,” he said. “Trying to figure out my schedule and training programs and playing prep and the things I need to work on for each major venue. It’s just a different calendar order and different time of year.

“But this is a big run for us coming up here. I’ve been gearing up for this, and looking forward to the challenges of not only this week, but obviously the [FedEx Cup] playoffs and a U.S. Open and then the Masters.”

Woods has had success at Harding Park, going 5-0 at the 2009 Presidents Cup and winning the WGC-American Express Championship in 2005. Much has changed, including Woods’ physical ability to swing a golf club.

That was in question after a poor second round of the Memorial Tournament last month, where he tied for 40th in his only competitive appearance since the PGA Tour’s restart following the pandemic shutdown.

Woods, 44, dealt with back stiffness during a second-round 76. He improved over the weekend but still struggled on a brutally tough course and shot 76 in the final round.

While Harding Park might not be considered brutal, it will still be a stiff challenge at more than 7,200 yards and playing to a par 70 with seven par 4s in excess of 450 yards. Two-time defending champion Brooks Koepka called it “a big boy golf course.”

And with temperatures hovering in the 50s in the mornings and likely to not reach 70 for most of the week, the ability to get loose will be part of the struggle for Woods.

“I think that for me when it’s cooler like this it’s just make sure that my core stays warm, layering up properly,” he said. “I know I won’t have the same range of motion as I would back home in Florida, where it’s 95 [degrees] every day. That’s just the way it is.

“Talking to some of the guys yesterday, they were laughing at their TrackMan [a measuring device] numbers already. They don’t have the swing speed or ball speed they did last week. It’s just the way it is. It’s going to be playing longer. It’s heavy air weather and whether the wind blows or not, it’s still going to be heavy. The ball doesn’t fly very far here.”

Woods will have to contend with the chilly conditions at least one morning. He begins play on Thursday off the 10th tee at 8:33 a.m. local time, along with former PGA champions Rory McIlroy and Justin Thomas.

After playing 18 holes Sunday and nine holes Monday, Woods elected to forgo any work on the course Tuesday and decided to simply practice. Having played just once in the past eight weeks — and only once in the past 11 tournament weeks on the PGA Tour — Woods admitted that his competitive rust might be his biggest obstacle.

“It’s just competitive,” he said. “I haven’t played that much. … But the results that I’ve seen at home, very enthusiastic about some of the changes I’ve made and so that’s been positive.”

Woods would not disclose those changes, but when asked whether he could win this week, he didn’t need to say much.

Zhang soars to joint-3rd with eagle at 3M Open 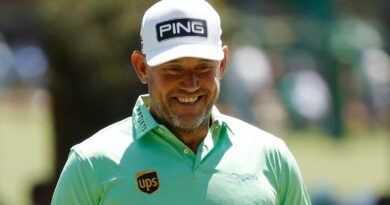 The Masters: Lee Westwood hopes to make history and replace Jack Nicklaus as oldest champion at Augusta alongside son Sam 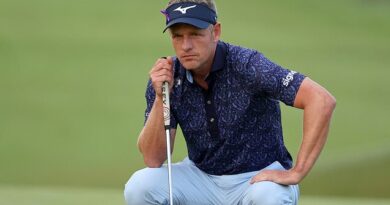