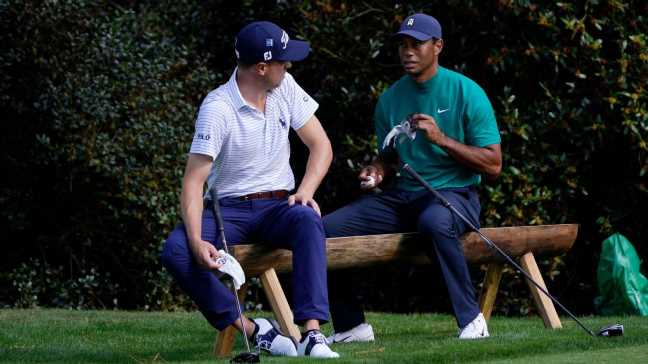 Tiger Woods has offered no official updates on his status in the months following a February car crash that caused significant injuries to his right leg and left him hospitalized for weeks.

Recent photos and video of Woods watching his son, Charlie, at a junior golf tournament and standing without aid provided hope that the 15-time major winner is at least returning to some quality of life.

And that is basically what PGA Tour player Justin Thomas said in a recent podcast interview in which Thomas said he tries to visit Woods a couple of times a week at his South Florida home.

As for any golf of golf future, Thomas is as curious as anyone.

“I don’t know. I mean, I know that he’s going to try,” Thomas said on the No Laying Up podcast. “I don’t see him ever playing if he can’t play well. He doesn’t strike me as a guy who’s played at home and he’s shooting a bunch of 75s and 76s and he’s like ‘OK, I’m gonna give Augusta a try this year.’ That’s not really gonna be him, at least from my understanding, what I know of him.”

Woods, 45, previously has returned from serious injury, coming back to win the 2019 Masters after undergoing spinal fusion surgery in April 2017. Woods won his fifth Masters and 15th major title and had three total victories following his return in 2018.

He was recovering from another minor back procedure in February at the time of the crash.

“He knows that there’s a pretty good chance that that was the last chance he really ever had, before that, of making another run,” Thomas said, “but at the same time, I know how determined he is and I know he’s going to want to at least try to give something again.

“Obviously I hope he does. But at the same time, as I said after the accident, as long as he can be a dad and be normal with that again, that’s the No. 1 priority, and the rest of this is a bonus.”

Thomas joked that Woods’ sarcastic personality is still the same, “so nothing has changed there, so I’m glad to see that he’s still chipper as always.”

He added that Woods is doing well “all things considered.”

“I mean, it’s Groundhog Day,” Thomas said. “Every day’s the exact same thing for him. But at least he’s able to — pictures were going around of him at Charlie’s tournament, [his daughter] Sam’s soccer tournaments here and there. He’s able to be a dad somewhat again, which is most important.”

Woods’ charity tournament, the Hero World Challenge, is scheduled for next month in the Bahamas. Even if not playing, Woods would normally be expected there, as was the case when he was recovering from back issues in 2015. But it is unclear if Woods will be at the tournament, which would mark his first public appearance since the crash. 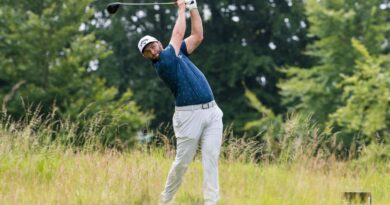 Rahm: Learned to adjust swing due to clubfoot