A vintage Tiger Woods put the International side on notice after starring on the opening day of the Presidents Cup, but the United States haven't had it all their own way at Royal Melbourne.

Woods fired four birdies in the opening five holes – including a spectacular chip-in on the par-three fifth where he ordered playing partner Justin Thomas to retrieve his ball from the cup – as the fancied American duo beat Marc Leishman and Joaquin Niemann four and three. 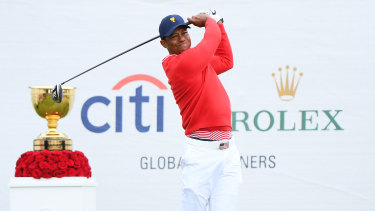 Tiger Woods registered the United States’ first point of the Presidents Cup after combining with Justin Thomas on Thursday.Credit:Getty Images

Controversial American star Patrick Reed was jeered as he stepped onto the first tee, his first tournament since being embroiled in a cheating scandal at Woods' own tournament in the Bahamas.

The former US Masters winner was accused of improving his lie in a waste bunker by shifting sand.

The International team hasn't led after the first day of the Presidents Cup since 2005 and is trying to emulate its  only success in the event at Royal Melbourne in 1998.

Woods is expected play only three of the five sessions across the Presidents Cup.

The Masters: Why there’s no doubt Rory McIlroy will get Grand Slam