Tiger Woods has dismissed the idea he is golf’s ‘GOAT’ (greatest of all time) despite his blistering professional record. The revelation came in GolfDigest’s latest episode of ‘A Round with Tiger: Celebrity Lessons’, a four-part series that was filmed in February this year, just one day before Woods’ car accident in Los Angeles.

The 15-time major champion was joined by former NBA star, Dwyane Wade in the show’s latest installment and the ex-Miami Heat man asked Woods what he thought of his ‘GOAT’ title.

When asked, the five-time Masters winner was quick to dismiss the label saying: “I’m not the GOAT.”

Wade then replied: “Right, see there we go. Let’s get to that. Certain people will say, ‘The GOAT! The Greatest of All Time!’ And you will say well, I’m not because of… you have your reasons.”

Woods currently sits tied for first at the top of the all-time PGA Tour wins list, after his last win at the 2019 ZOZO Championship equaled Sam Snead’s record of 82.

During the TV appearance, the former NBA man continued to press Woods on the ‘GOAT’ label to which the Californian golfer replied: “I’m not there yet.”

Wade then followed up with another question, saying: “What will make you be there? When you’re done?”

Before the 45-year-old quickly replied: “I’m not done.”

Since his last win in the 2019 ZOZO Championship, Woods has played only four PGA Tour events in just under two years following the coronavirus pandemic, ongoing back issues, and a life-changing car accident in February of this year.

However, the 41-time European Tour champion is more than known for his returns, after his clinching of the Masters title in 2019 capped off one of the greatest comebacks the world of sport had ever seen.

Woods would go onto say ‘I’m not done’ another two times in his TV interview with Wade, giving golfing fans around the world the hope they will see arguably the greatest of all time return to the golf course.

Wade paid tribute to the golfing great earlier in the GolfDigest episode, explaining – like many golf fans – that Woods was his inspiration for getting into the sport.

The former Heat star said: “You know, that’s the reason I picked up a golf club, because Tiger made it cool,” the NBA alum said. “So I want to learn something from the greatest of all time.”

As well as his appearance on the pre-recorded GolfDigest show, there was more good news for Woods fans this week, after his former Ryder Cup teammate gave a positive update on the 45-year-old’s rehabilitation following the severe injuries he sustained in February’s crash. 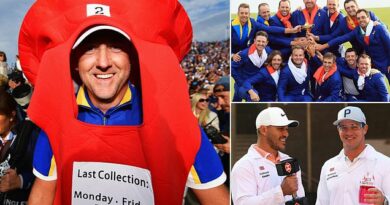 How can the Hall of Fame snub a legend like Padraig Harrington?