After a ho-hum opening round at his Genesis Invitational, the wheels fell off for Tiger Woods on Friday and the struggle continued on Saturday.

Woods entered the week at Riviera Country Club in search of a record-breaking 83rd PGA Tour victory at the course he made his Tour debut at 16 years old. Now he’s playing for pride.

It’s not often a 15-time major champion looks like the common weekend hacker, but that was the case on the par-4 13th hole for Woods, where he four-putted for just the 14th time in his career.

After beautiful drives on the previous two holes, Woods found the left rough on No. 13 but was able to reach the green with his approach, some 18 feet from the pin. His birdie putt was short, and his par putt caught the edge and released to six feet. Whether it was a mishit or lack of concentration, Woods missed the come-backer for bogey and tapped-in for double-bogey six.

STATISTICS: Tiger Woods by the numbers

Unfortunately for Woods, this hasn’t been a rare occurrence. The last time he teed it up on Tour he four-putted at the Farmers Insurance Open on the first hole of Friday’s second round. 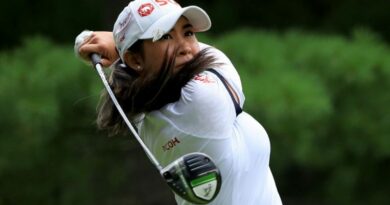