Tiger Woods has confirmed he will miss the US Open later this month as he continues his recovery after withdrawing from the PGA Championship. However, he has set out the plan for his next two tournaments on the PGA Tour amid the start of the Saudi-backed breakaway LIV Golf Invitational Series.

On Tuesday, Woods took to Twitter to announce his upcoming absence from the season’s third major to focus on his recovery. The 46-year-old icon plans to return to action in the JP McManus Pro-Am before looking to improve on his last major performance in next month’s The Open.

His statement read: “I previously informed the USGA that I will not be competing in the @usopengolf as my body needs more time to get stronger for major championship golf. I do hope and plan to be ready to play in Ireland at @JPProAm and at @TheOpen next month. I’m excited to get back out there soon!”

Woods’ absence will come as a blow to those watching the US Open, starting just days after the LIV Golf Invitational Series’ inaugural tournament at the Centurion Club. Former world No 1 Dustin Johnson will feature along with Sergio Garcia, Ian Poulter and Lee Westwood.

Woods, still recovering from a life-threatening car crash in February 2021, looked worse for wear in the third round of last month’s PGA Championship. The American icon played through pain to make the cut by the finest of margins on Friday but collapsed as the temperature dropped at the weekend.

He looked uncomfortable as he shot a score of 79, his highest-ever round at the PGA Championship. And his difficulties prompted him to pull out in joint-last place on 12-over par and 21 shots behind then-leader Mito Pereira heading into the final round.

Fans have flooded into the comments on Woods’ post to offer the 15-time major winner support. One fan wrote: “Tiger, my dear chap, do what you need to do. Few people want to see you back out there, challenging for the top of the leaderboard, more than me (I know you’d be one of them).”

Another offered his support: “Wishing you all the best with your rehabilitation and getting stronger, Tiger. I totally understand what struggle you are going through, and it’s challenging, but if I can do it, then so can you.” 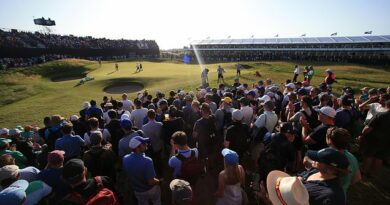 The Open is yet another event that isn't coming home